The West End was feeling strangely under populated that Thursday evening. Whether it was the proximity of the Easter holidays, the sprightly spring weather or the cost-of-living crisis that was acting as a brake on socialising…there was no denying it, things felt flat. 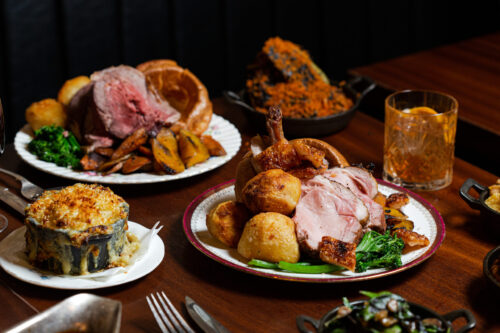 That was quickly rectified though as we arrived at the newly opened Blacklock Covent Garden. Advertised as being on Bedford Street, we found it hiding around the corner and occupying a basement, a task which we could have accomplished quicker if we’d skipped the pre-prandial couple of pints that the sunshine made obligatory.

For those who don’t know, Blacklock is carnivores’ paradise. Yes, they sell steaks, where doesn’t, but the signature dish (or dishes,) are the various chops that make up most of their menu. And whilst we’re all being encouraging to eat plant based, the Blacklock herd is one step ahead being 100% grass fed. 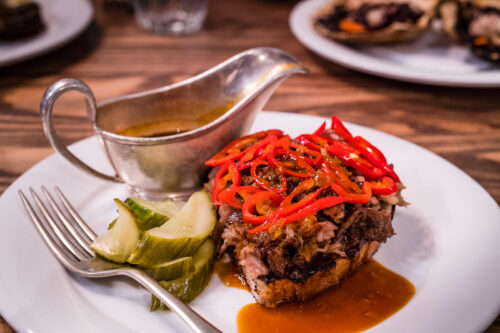 Starting first in Soho there are now several branches across the capital of which Covent Garden is the latest incarnation. Though new the décor pulled off the trick of making the dining room appear like it’d been around for a while suggesting that the staff knew their chops (apologies, I was working out how to get that dreadful pun in here.) It feels a bit like a cross between restaurant and what I’d imagine an Old New York cigar bar would look like, all tasteful muted browns and clean edges.

The menu is relatively short offering various cuts of meat including skinny chops, larger chops, steaks, and a meat free option (currently grilled Jerusalem artichoke.) There is a lunch selection of buns, burgers, and sandwiches, that are served quicker, but that can be ordered at dinner as well.

Blacklock is known almost as much for their booze as for their beef, and to start we ordered a pair of old fashioneds. These were tasty if slightly sweeter than I’m used to, I can only conclude that mine evaporated though as the glass went from full to empty in record time. 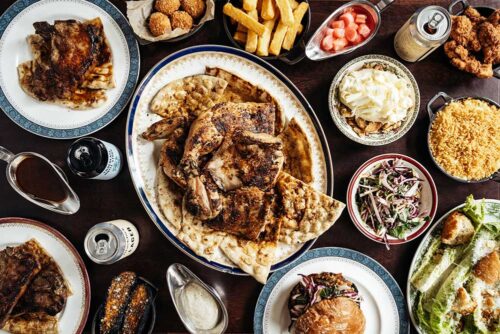 I’d spied the all-in option on the menu sometime prior to our visit. This offered the full selection of pre chop bites chicken and horseradish, egg and anchovy &amp; cheese and pickle to be followed by a range of chops served on a flat bread trencher with two sides. At £22 a head this seemed to be an ideal way of trying a range of different meats without breaking the bank.

As it was sunny outside, we around a bottle of the rose tap wine…what’s tap wine I hear you ask? This is wine which is stored in a keg and so can be transported and stored with much less waste than you’d have with individual bottles. For everyday wine in a restaurant or even a pub this seemed to me to a great innovation and the resulting quaff was pleasant with a clean dry with hint of fruity flavour that suited the food well. At £29 it was both reasonable, but also the single most expensive element of the meal. 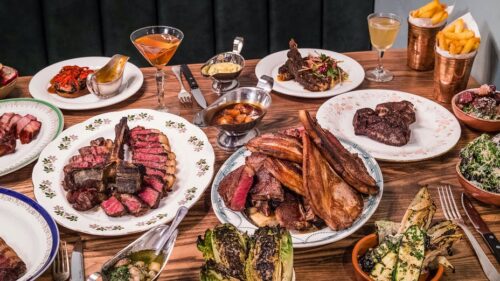 The pre chop bites arrived with the advice to eat them in order chicken to cheese, which appeared to be sound advice. The chicken and horseradish were spicy enough to start the palate cleaning process completed by the cheese and pickle (the pickle here being pickled vegetables whose astringency was enough to finally rid my mouth of the memory of our aperitive pints.)

The selection of chops when they arrived looked more like a relief map of the Cairngorms rather than something you’d be expected to eat. I’d seen the pile on its way over to our table and couldn’t quite believe we’d be able to get through it all. For the sides we’d ordered the beef dripping chips and the heritage broccoli and walnut salad. The salad was superb a bit like how you’d make a Waldorf salad if you found yourself unaccountably all out of Waldorfs. The chips were the only item in the whole meal I found underwhelming, there was nothing wrong with them, but I’d expected them to be fatter and more obviously beefy then they transpired to be.

The chops though made up for it with both of us getting a skinny pork, lamb, and beef chop. These were grilled and seasoned well and full of flavour which the trencher set underneath soaked up a treat and made for a great after meat treat.

The bill when it came was £99 for 2 including the drinks and was as trim as my waistline was now bloated. This was outstanding value for a meal of the quality we had enjoyed. No doubt you could spend far more of you wished, especially on steak. I was more than happy though, even if it meant I would now need to diet for a month to get back into my pyjamas.

Rocking back to the Hard Rock

They say nostalgia aint what it used to be, but hey I was willing to take a chance on a stroll down memory lane (or ... Read Feature

Zelman Meats used to be hot. About 6 years ago when I penned this review, https://nappyvalleynet.com/high-steaks-zelman-meats/ Zelman’s was the sort of place ... Read Feature