The Phoenix Theatre on Charing Cross road was indelibly linked in my mind with one
musical, one I have in fact never seen, Blood Brothers. For 21 years I’d walk past the
posters advertising the production at least once a week, but strangely never felt the desire to
go in. 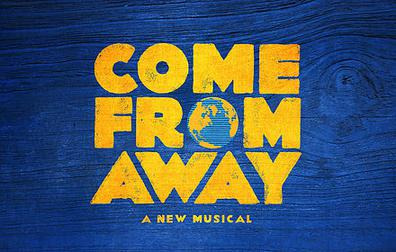 Come From Away opened at the Phoenix in 2019, the first UK production for the 2017 Tony
award nominee. It tells the story of the impact of 9/11 on both the relatively isolated residents
or Gander Newfoundland, and the airline passengers forced to put down there by grounding
of all civil aviation.

This tale is told through a cast who rotate through multiple characters, a sparse but
surprisingly adaptable set that portrays anything from a planes interior to a Tim Horton’s and
a local bar. This is backed up by a score that ranges from jaunty, to melancholy whilst
passing through all notes in between.

The hospitality of the locals is offset against the fear, nervousness, and shear exhaustion of
the passengers, most of whom had no idea what was going on and why they’d suddenly
been made to put down on a rock in the middle of nowhere. Whilst the show focuses on the
events in Newfoundland, the wider tragedy forces itself into view through the characters
interaction with TV and other media.

I don’t want to say too much, as I had little idea of what to expect beyond the basic premise.
What I can say is that this is a show that put me through the emotional wringer. It’s tale of
human kindness in the face of tragedy was one that brought a smile to the face at the same
time as a tear to the eye.

The performance I was at received a standing ovation from a crowd who were moved far
more than by a mere box set of John Lewis Christmas ads. I felt more drained than I had
been by any theatrical experience for years and needed several drinks before attempting to
navigate the way home.

I have no idea if Come From Away will last at the Phoenix anything like as long as Blood
Brothers did, so don’t take a chance on closure or COVID, book your tickets now. You won’t
regret it.

The Roundhouse Summer Sale 2022 is on now, with discounts on bespoke kitchens and furniture from 1st - 31st July across our Studio and Design collections ... Read Feature

Curry up! – Pushing the boundaries at Veeraswamy