Just 837 teenagers scored a clean sweep of the highest grade in their GCSEs this summer, with more girls achieving straight top grades than boys.

Overall the proportion of GCSEs awarded top grades has risen for the second year in a row after the biggest exams shake-up for a generation.

Hundreds of thousands of youngsters received their results on Thursday after sitting the Government’s tough new GCSE courses, and more than one in five (20.8%) UK GCSE entries scored one of the three top grades this year, up from 20.5% last summer.

The proportion receiving the top grades – at least a 7 or an A grade – is the highest since 2015 and marks the second year-on-year rise in a row, according to data published by the Joint Council for Qualifications (JCQ). 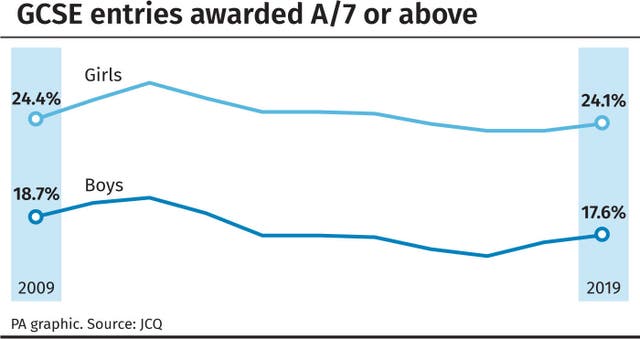 But separate figures, published by exams regulator Ofqual, showed that just 837 16-year-olds in England taking at least seven new GCSEs scored a clean sweep of straight 9s – the highest grade available under the new system – in all subjects.

This is just a tiny fraction (0.1%) of the more than half a million teenagers in England who take GCSEs.This summer’s clean sweep figure is up from 732 16-year-olds in 2018, with the increase being put down to a higher number of students taking all of their GCSEs on the reformed numbered grading system.

A total of 10 students scored grade 9 in 12 GCSEs, while most of the students (293) who achieved the clean sweep of grade 9s were studying a total of 10 GCSEs.

The proportion of entries getting at least a 4 or a C grade is also the highest since 2015.

The lead enjoyed by girls over boys at A/7 is unchanged from last year (6.5 percentage points), while the gap at C/4 has narrowed slightly from 9.1 points to 8.8. 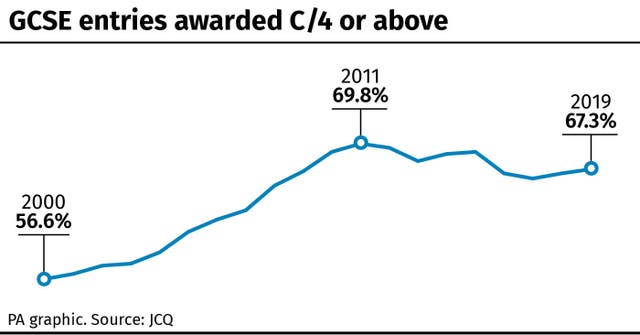 Prime Minister Boris Johnson congratulated students and said: “I’m delighted to see an increase in those studying EBacc subjects – including science, computing and foreign languages – as well as creative studies, meaning pupils are getting the rigorous yet well-rounded education they need.”

Education Secretary Gavin Williamson said the results show pupils are going on to further study and the world of work “with the best possible foundations, focusing on the academic cornerstones of education while also stretching themselves creatively”.

Under England’s exams overhaul, GCSEs have been toughened up, with less coursework, and exams at the end of the two-year courses rather than throughout.

Traditional A*-G grades have been scrapped and replaced with a 9-1 system, with 9 the highest result.

Most students receiving GCSE results this summer will have been awarded numerical grades for all their subjects as almost all courses have moved to the new system. 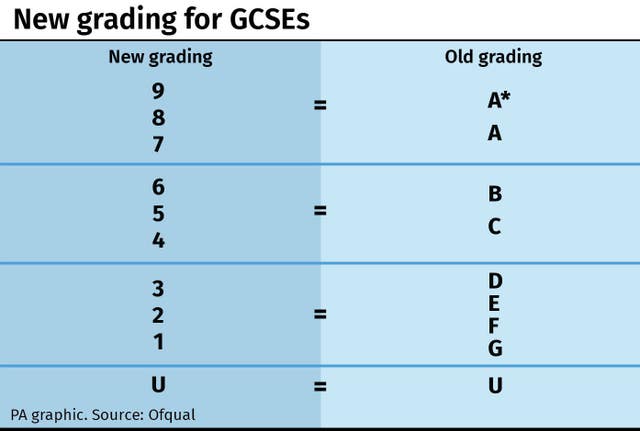 A total of 25 subjects were awarded new grades for the first time this year.

GCSE courses are also taken by students in Wales and Northern Ireland, where there have been separate exam reforms.

Meanwhile, school leaders have raised concerns that the new GCSE courses are “demoralising” for lower-achieving students.

A poll by the Association of School and College Leaders (ASCL) of 554 members in England found that eight in 10 believe the reformed courses are having a detrimental effect on struggling students.

ASCL general secretary Geoff Barton said there were concerns that some pupils would be “written off”. 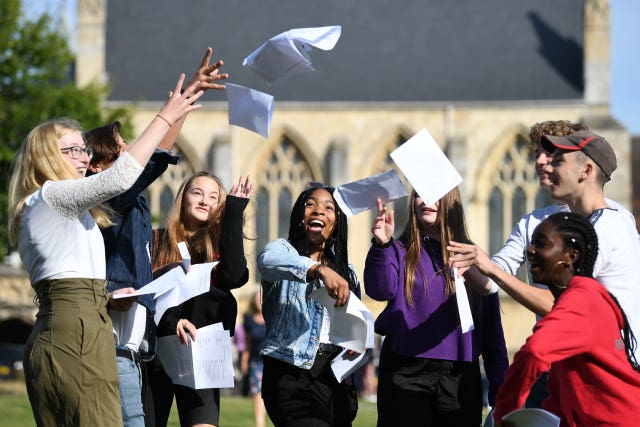 He told the PA news agency: “(New GCSEs) are harder in two respects: the content is definitely harder, but also the mode of assessment is harder for some students.

“We are concerned for those young people, that in a qualification that is called a general qualification, it appears to have as collateral damage a third of young people who get a 3, a 2 or a 1 in English and maths and are told they haven’t met national standards.

“At the current rate it’s going to be a long time until you don’t have a third of young people written off because they got 3s, 2s and 1s.”

A Department for Education spokeswoman said: “Exams are an essential part of ensuring that young people have acquired the knowledge and skills they need, but should never be at the expense of a young person’s well-being.”