Marsha de Cordova has used Sadiq Khan instead of Jeremy Corbyn in her campaign leaflet and vowed to fight “night and day” for Remain.
Mr Corbyn began his campaign on Thursday in Battersea, southwest London, which Marsha de Cordova took for Labour from the Conservatives in 2017 by 2,416 votes.
The Labour leader said he would hold a second EU referendum and resolve Brexit within six months but declined to say whether he would back Remain or Leave.
Ms De Cordova, the shadow minister for disabled people, introduced Mr Corbyn at the event but her leaflet, headlined “Standing up for Battersea on Brexit”, makes no reference to him. It carries a quote from Mr Khan, the Labour mayor of London, saying: “Battersea is a two-horse race between Marsha de Cordova — who is the strongest possible Remain voice for Battersea — and Boris Johnson’s no-deal Brexit candidate. No other party can win here.”
The Liberal Democrats won 8 per cent of the vote in Battersea in 2017 but the Tories believe that the rival party could enjoy a surge and peel off Labour support, helping them to retake the seat. In Ms De Cordova’s letter to constituents she said that she had “robustly opposed Brexit at every single stage” and called for a People’s Vote. She would then campaign for Remain.
Other Labour candidates in Greater London, including Faiza Shaheen, who is seeking to unseat the former Tory leader Iain Duncan Smith in Chingford & Woodford Green, do not refer to Mr Corbyn on their leaflets. Candidates in Streatham and Bermondsey & Old Southwark have done the same.
Yesterday a Labour candidate apologised for saying that she would celebrate the deaths of Tony Blair, Binyamin Netanyahu and George W Bush. Zarah Sultana, 26, who will fight Coventry South, tweeted in 2015 about the idea that people should not celebrate others’ deaths. In a message reported by The Jewish Chronicle she wrote: “Try and stop me when the likes of Blair, Netanyahu and Bush die”.
Ms Sultana, whose selection campaign was backed by the activist group Momentum and the trade union Unite, said that Israel was “created through ethnic cleansing, sustained through occupation, apartheid and war crimes”.
She said that the messages had been posted when she was a student “exasperated by endless cycles of global suffering, violence and needless killing resulting from decisions by political leaders, from the Iraq war to the killing of over 2,000 Palestinians in 2014, mostly civilians, which was condemned by the United Nations”. She added: “I do not support violence and I should not have articulated my anger in the manner I did, for which I apologise.

And Conservative Kim Caddy manages not to mention either Brexit or the self serving blond philanderer on her leaflets!

Corbyn is an electoral liability for a great many voters, so it's very sensible that Marsha has left him off her campaign material. Fleur Anderson in the Putney constituency has done the same and there's a big EU flag on her leaflet with prominent Pro-Europe and Proudly remain. I'll post in in a minute.

As I mention in my post on tactical voting, Corbyn has the lowest personal ratings of any leader of the the opposition in modern times, ergo he won't win a majority. Therefore People who can't bear Corbyn, and find him only marginally less scary than no deal and our current mendacious lying government, can safely vote for their remain Labour MP because what I pray we'll get is a Lib/Lab coalition and Parliamentary arithmetic which means JC can't do anything silly.

As for the LDs peeling off votes from Labour, no chance, Kim Caddy hasn't a prayer. If anything, the LD candidate Mark Gitsham will peel off votes from Tory remainers who know they should probably vote Labour tactically, but can't quite hold their nose enough because Corbyn.

If the LDs had parachuted someone high profile like Chuka into this seat, motivated local activists long ago when it was obvious an election was coming, backed it with a great campaign and head office support, they may have had a chance, but I'm glad they didn't because we have a strong remain sitting Lab MP.

I really don't like Corbyn but all I care about is getting a remain Parliament, a second (free and fair) ref, and preserving our kids' freedom of movement. I hope those of you who share that view will vote tactically.


The Liberal Democrats won 8 per cent of the vote in Battersea in 2017 but the Tories believe that the rival party could enjoy a surge and peel off Labour support, helping them to retake the seat. In Ms De Cordova’s letter to constituents she said that she had “robustly opposed Brexit at every single stage” and called for a People’s Vote. She would then campaign for Remain.

I believe the headline by our NappyValley Community Editor is suggesting that some Labour MPs have little confidence in Labour Party leader “Messiah” Corbyn, if I've interpreted correctly. Then why is Battersea MP, Marsha De Cordova, considered a Corbynista, and as far as I know through local Labour Party activism, very supportive of her party leader? 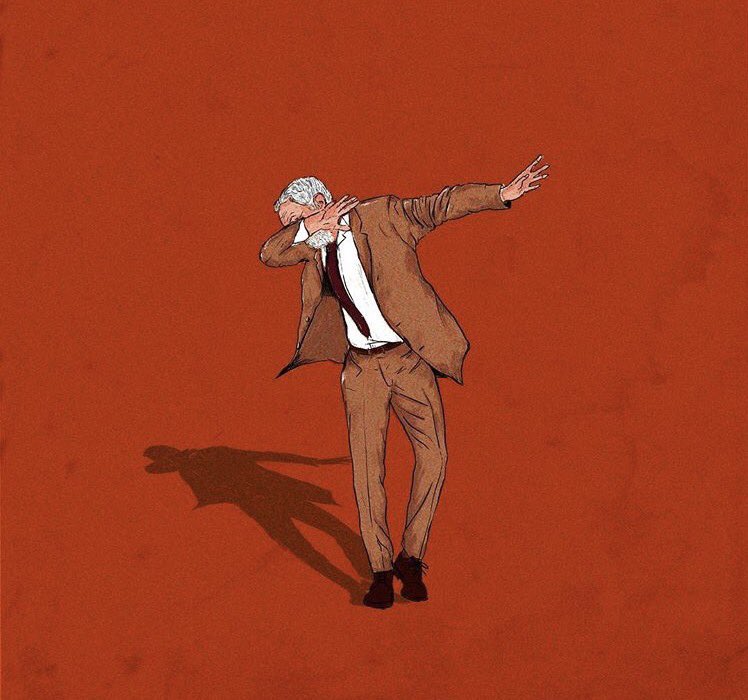 Messiah doing the Dab
Local London MP and London Mayor mentioned without reference to national Party leader in local-issues leaflet is NOT so glaringly unusual. Now going-off on a tangent: what is unfathomably UNUSUAL at least in my mind, is the perversion and corruption of the “Leave” result of the 2016 European Union referendum. In our first-past-the-post system of voting or even a simple majority in referendum, I find it astonishing that the “remain” campaign has been emboldened and active three-and-half years after the decision of the mentioned referendum. If there is to be no finality of decision where 17.4 million people of the electorate participated, and in the passage of time the losing campaign want to overturn that decision, then certain past election results retrospectively can also be made null-and-void. This critique is also extended to parallels of the Scottish Independent referendum. Why don’t we the people / “demos” have different referendums on variety of issues all the time – and the Brexit impasse has highlighted the less than noble integrity of the representative democracy in the House of Commons? Jeremy Corbyn has pledged referendums if Labour Party is elected in this vital General Election 2019. As a staunch “leaver” I can just about stomach that (and if “remain” wins we’ll campaign in time to reverse that decision – haha!). I believe that’s why the EU referendum leaflet we ALL received mentioned akin to “once in a generational vote” - remainers don’t geddit! A local case in point of how Parliamentary representative democracy deceives the British people: the previous Tory Battersea MP was an “IN” voter but decided to respect the “national” majority of Euref 2016 and campaigned “OUT” of EU. And indeed in fairness to sitting MP Marsha De Cordova, her “Remain” stance is representative of her constituency vote, which was pro-Brexit by some 62%, I believe. In contrast to Marsha, another local Labour Party MP for Vauxhall Kate Hoey, in her constituency voted to remain in EU, but she has vociferously supported “leave” result. And here’s the rub of the double-speak dissemble we don’t know how the respective MPs actually voted at the secret ballot in EUREF’16. 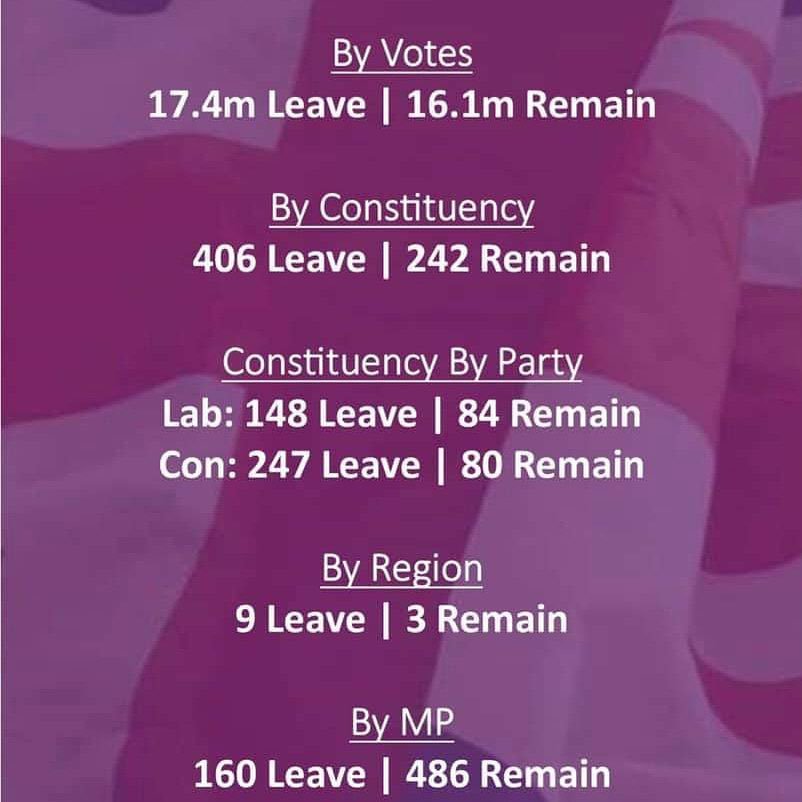 Brexit Results Conundrum (Source: Twitter - pending validity check) From the unverified graphisc above we have a remainer Parliament with 486 Remain MPs, at odds with 406 Leave voting constituencies. Democracy in the UK is alive and kicking - Bah! And here we are, Wednesday's dissolution of the House of Commons for the General Election 2019 on December 12th. There is only one clear vote for the Britons eligible to vote, that can gain a majority and pass through a Brexit deal of any kind and an even unlikely Remain referendum choice.All other options are distraction and likely to split House of Commons and back at the same standstill / impasse. Britons were here in 1979 with country at standstill from Union strikes but this time its Parliament bringing the country to standstill - who was ushered in as PM then?!