A door-to-door salesperson scam that has historically been linked to burglaries has become common in south west London.

The ‘Nottingham Knockers’, men coming round houses selling washing products and saying they are ex-convicts on a rehabilitation scheme, often visit houses in Wandsworth.

However, research on the scam elsewhere showed many burgled houses were visited by the scammers a week before, suggesting the salespeople case out houses to sell lists of wealthy households to burglars.

There is even a theory they feel and smell for mustiness on banknotes to identify houses with piles of money and pass those addresses on.

When Janette Blanco, 37, had the scam salespeople come knocking on her door in Clapham Common this New Year’s Eve, she thought they were just normal salesmen.

She said: “I thought it was really weird because they came at 8.30 in the evening. No salespeople come around door-to-door at New Year’s Eve.”

Blanco heard about the ‘Nottingham Knocker’ scam a few days later and after speaking to her husband about the visit, it fell into place that her visitors were scammers.

She said: “I realised the scam really was a thing and there was this whole name for it. I went down a hole thinking: ‘Oh my gosh – they could have been staking out our house’.”

Her door callers gave her husband a backstory about a rehabilitation scheme and they flogged cheap washing products for very high prices, which fit with the numerous accounts of the scam she had been hearing from neighbours and what she read in the press.

Blanco said door callers asked about her husband’s American accent and were trying to gauge how long they had been living in the house.

“It was weird. Why are you going to ask how long we have been in the house?” she said. 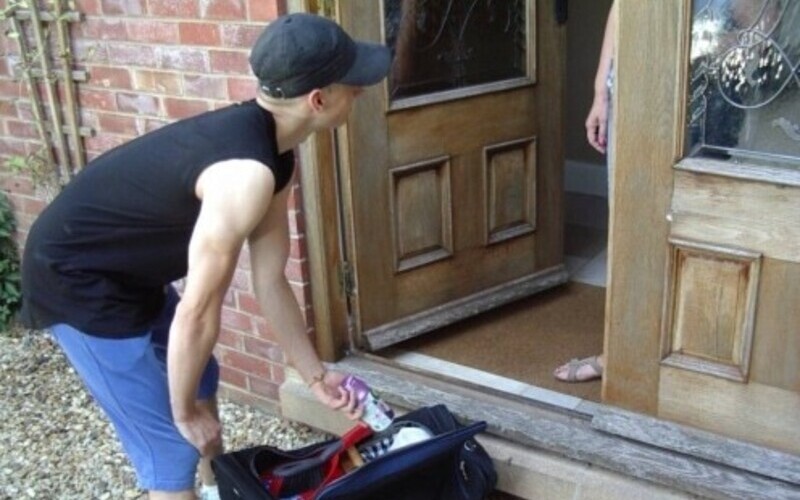 Operation REPEAT, an initiative raising awareness of door-step fraud, says there have been many instances where people who have purchased from the Knockers were burgled shortly after.

Blanco’s scammer looked in his late 30s, eastern European, with black clothes. He was friendly but pushy with his sales tactics. There were two men with him of similar physical description, standing with duffel bags on the other side of Blanco’s gate.

According to Operation REPEAT the scammers get the cleaning products from a warehouse before they are driven in groups of around in vans and busses to an area to start their work.

Another resident in Clapham Common who gets visits from the knockers every six months to a year and cites similar descriptions, says they swear at residents.

He said of one abusive incident: “It actually even shook me. I was quite surprised at that after being polite. It was quite vitriolic.”

His wife added: “If they come to the door and try selling you something they’re very charming and have got all the patter, but the minute you say I’m really sorry, they tend to get very abusive and kind of start swearing.”

David Haywood, Police Community Support Officer at Merton Police, said: “We would always suggest to residents to be careful on their doorsteps and use appropriate security measures.

“Using a video doorbell or a door’s spy hole for example is a great security feature so you can answer your door without opening it.

If anyone thinks they have been a victim of fraud they should call Action Fraud on 0300 123 2040 or report it on their website: Reporting fraud and cyber crime | Action Fraud

Two young men have explained to me that they have to pay rent to an organiser, buy the goods from them and can’t leave if they are in debt.

So it’s possible they too are being scammed and, at worst, this is modern slavery .

I have written to my MP this issue.