The south London lidos to visit during heatwave
Post Reply

The south London lidos to visit during heatwave

The UK heatwave is officially here, bringing highs of up to 32C in parts of England.

We are all looking to find ways to cool down, whether that’s putting up a paddling pool or heading to one of our beautiful outdoor swimming areas.

Although London is a built-up metropolis, there are little pockets of space where you can relax and unwind dotted around the city.

Here’s a list of south London’s best lidos and swim spots, where you can cool-off in the lead up to summer.

Brockwell Park's gem, in Herne Hill, is a classic for Londoners. This 49-metre pool has been around since July 1937, although it was closed temporarily in 1990.A public campaign pushed for it to be reopened four years later, in 1994, and it has been a popular choice ever since.

Hampton Pool is said to be one of the very few swimming areas in London that is both heated and open all 365 days of the year. It was first opened in 1922 and has a big 36-metre main pool, with two slides, and a small pool for children. It’s managed by YMCA London South West.

3. Pools on the Park

Pools on the Park, Richmond

Previously known as Richmond Baths, this leisure facility is in the Old Deer Park in Richmond. The 36-metre open-air pool is south-facing, with grassy areas for sunbathing that are a delight in the summer

This list would be incomplete without Tooting Bec Lido. Wandsworth has one of the largest swimming pools, by area, in the UK at almost 92 metres in length and more than 30 metres in width. 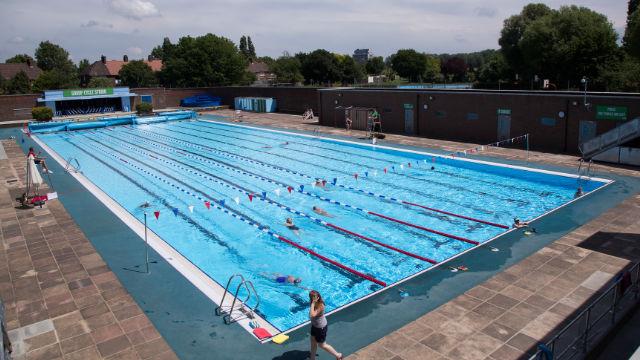 The 1930's outdoor swimming pool is situated in Hornfair Park. The lido was the last municipal lido to be built in London, being completed just before the start of WWII. It fell into disrepair during the early noughties and was closed between 2004 and 2012 when it was re-opened by charitable social enterprise GLL.