If you had the chance to do it all over again, would you do it differently? Charlotte Peterson met three homeowners happy to share their build and refurbishment experiences and found consensus in their lessons learned.

Dan and Alysia Scudamore started their grand design on their semi-detached ‘forever’ family home three years ago and it was then that the issues with the neighbours began, revolving around a Party Wall Award. The attached neighbour was undertaking a basement dig at the same time, and after some disagreement about what should be considered on such a build, two surveyors were appointed.

On the other side of the house, earlier planning permission for a side return had been rejected following an objection, so this time Dan went for Permitted Development, adjusting the dimensions to suit.

The build was to result in a 48 sqm kitchen with a side return accessible from the front of the house, leading either into the kitchen via the utility room, or directly out to the back garden, where they’ve also built a covered BBQ area – another bone of contention. 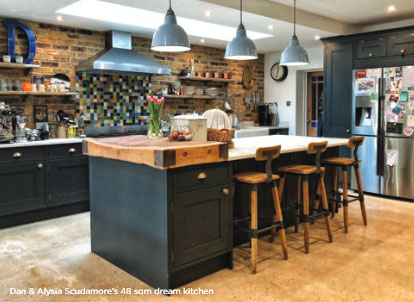 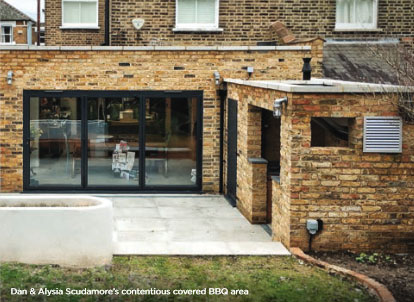 an was the project manager – he was confident as he’d had success on a smaller project with the same builder. “If I had my time again, I’d schedule better,” said Dan. “I just wasn’t up to speed with the time it takes to get things done. Planning permission delays meant we missed our slot with the builder, then the unforeseen party wall issues arose”. Neighbourly relations went from bad to worse, mainly revolving around damp coursing and pointing, not legal requirements of the Party Wall Award. When Dan used a particular coping detail around the new flat roof, different to the one in the original plans, they were taken to court, the neighbour raising the damp course argument too.

REPLACING WINDOWS AND DOORS – WHAT IS A FAIR PRICE?

“There is hardly anything in the world that some man cannot make a little worse and sell a little cheaper, and the people who consider price only are this man’s lawful prey”

Homeowners replacing Victorian windows and doors should bear those words in mind.

Windows and doors require qualified designers to measure and design them accurately.

The manufacturing needs to be of a high standard to stand the test of time and keep the elements at bay.

Property is valuable – use timber – and accurately replicate the original features.

Finally, the installation team should excel in their trades and provide prompt aftercare should it be required.So, if you are considering a cheap quote, bear these comments in mind and don’t become ‘lawful prey’.

Meanwhile, the neighbour on the other side wouldn’t give access to the builders to render the new side return as they were so cross about the work being done. But Dan kept the lines of communication open and managed to source a render that would dry in a day in a colour that everyone was happy with.

Legal fees were mounting on the other side and just before the date of the hearing, an agreement was reached. This year, work has been done on the garden with more delays waiting for neighbours’ agreement. “Communication is key – with your builder, with your neighbours,” advises Dan. “It was very stressful in our case that we had difficulties with both sides, but nothing is insurmountable.”

Other practical issues included sourcing a polished concrete floor – Dan wanted aggregate rather than a smooth finish. “The underfloor heating was in, the floor was laid, the guy turned up to polish it and said, ‘I can’t polish that, it’s screed not concrete’. Eventually I found someone who could do it, but we were delayed for two months.”

Dan acknowledges, “I should have done more research beforehand. I think that’s the key – to really understand the processes”, a point echoed by Lou Kelly who has completed several successful projects, most recently a full top-to-toe virtual re-build on Trinity Road.

“You can fall down by not fully researching a particular element of a build, particularly the finishes.” Lou had a similar tale about a concrete floor. She found a company, loved what she saw on their website but hadn’t seen any of their actual work. “He kept suggesting I went to see the finished article, but I never had time. It was laid – a polished concrete finish created using resin – and it wasn’t what we wanted.” Lesson learned.

Look at and feel the product with your own eyes and hands. “Online is brilliant, but nothing beats seeing the real thing. Buy things online – a kitchen tap, for example, but return it if you don’t like it. Don’t make do – you have to live with it.”

Similarly, Lou is emphatic that we shouldn’t be too British. “Don’t be afraid to say you’re not happy with something. You’re spending a lot of money and you want to get it right. More often than not, builders and suppliers will be happy to come back. Often they’re local and word of mouth means so much.”

Lou and her husband Alex have done several houses and learned new lessons each time. “The thing to remember,” says Alex, “is that there is always going to be room for improvement, always unforeseen issues. Be ready to make changes and keep talking to your builder.”

“And be prepared for the end result not to be utterly perfect,” adds Lou. “Most things can be rectified, others can’t completely, and most people will never notice. It can drive perfectionists mad.”

Lou and Alex are overflowing with advice, and their latest triumph on Trinity Road speaks volumes. They talk of accurate scheduling, detailed quotes – “never accept a quote that isn’t fully broken down”, warns Lou. Be prepared to wait for the builder you want if planning doesn’t come through on time, communicate constantly and have regular meetings. “What’s App has been brilliant,” says Lou. “The builders might not agree,” she laughs, “but for sharing images, maintaining a dialogue, offering a catalogued timeline of progress – it’s vital”. They also advise a project manager if you work full-time. 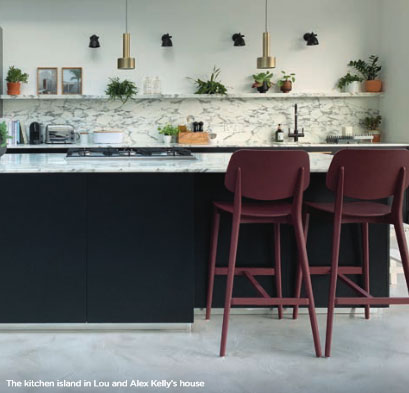 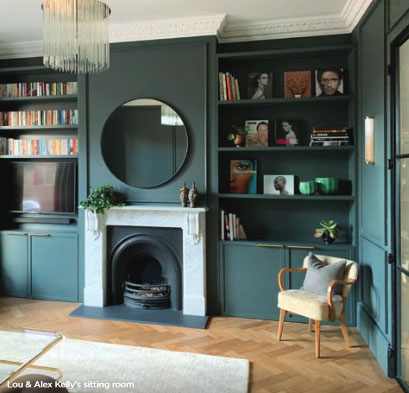 However, even seasoned professionals face major issues. The house was in a seriously dilapidated state, Alex explains. “When the roof came off, big problems were revealed and the builder wanted to re-quote for the whole job. We talked and it was clear he didn’t want to do it anymore. It was tough, but we found another builder quickly and the first lot were moving out as the new team were moving in.”

The secret of success is keeping the channels of discussion open. “I can’t think of any other industry where people just stop talking to each other, but it happens on building projects”, said Lou. “A full house renovation is one of the most emotionally draining things you’ll ever do, so approach it as thoroughly and as positively as you can.”

Lou and Alex are a wealth of knowledge: haggle on everything you buy; consider the VAT and eco breaks if you’re rebuilding; do up a house for you but remember you may want to sell at some point, so keep the hard finishes neutral (tiles and bathrooms) and make your mark with paint and soft furnishings; be prepared for mistakes; be willing not to ‘win’ every discussion – if you’re generous in that way, your builder will be in return.

‘BROKEN PLAN’ LIVING PERFECTLY COMBINES OPEN SPACE AND SEPARATION: TIPS ON HOW TO GET THE BEST OF BOTH WORLDS

• Before you take the sledgehammer to your home, consider how your lifestyle will fit with this more sociable and informal space

• Rather than removing an entire wall, take out sections or reduce height to allow family members to do different things without disturbing each other and get privacy when needed

• Keep your options open by using pocket, folding or sliding doors to partition the space when needed

• Use furniture such as sofas, sideboards or open backed bookcases to divide the space

• Freestanding screens will add texture, colour and interest to the space while creating zones

Over in SW16, Mark and Kelly Hamstead saw their family’s future in an Edwardian house in need of updating. Mark appointed a highly-recommended builder and took on the project manager role as well as his day job. They bought in early July and moved in by the end of October. “I swung by most days to check on progress and talk to the builder. It moves so fast to start with, but really slows down and then there are countless decisions to make,” said Mark

The family rented so the builders could have free rein of the house, undoubtedly a good move. They’d re-do the loft (already extended) and driveway at a later stage, but this is one thing Mark said they’d do differently. “Financially it was sensible, but to have the builders come back and to live around it was a pain. If you can stretch yourself, my advice would be to get the whole lot done in one hit.”

Mark and the builder quickly established a good rapport. “He was great at telling me what to order and when so that when the ‘fit-out’ came we had things ready to go.” “Communication was key with the Permitted Development process too,” reflects Mark. “Lambeth asked for a few changes which proved quite stressful as our builder’s start date was approaching. Work started inside while we waited for the approval, and I decided to be as nice and as helpful to our contact at Lambeth as possible – it paid off!” 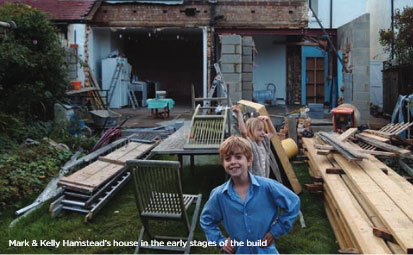 Another nugget of advice from Mark is to reuse and recycle. A built-in bookcase was removed, repainted and reused in Mark’s new study. When clearing out the old kitchen, they Googled the oven – a Lacanche worth several thousand pounds. Serviced and refurbished, it now stands as the centrepiece of the kitchen. And Gumtree came in handy too. “We offered the huge greenhouse for free,” Mark remembers. “A guy turned up and toiled for hours, carrying it out piece by piece. He got a greenhouse, I got rid of a greenhouse!”

Looking back, the biggest success for Mark and Kelly lay in their builder: “He was an involved point of contact for me, a pro-active creative thinker.” The same builder was invited back to make their original open-plan more broken-plan, creating a family/TV room for the now teenage contingent of the family, proof that what we need in a home changes over time. But that’s another whole feature. Maybe it’s proof though that, despite appearances, nothing’s set in stone, and nothing’s perfect.

HOW TO DO BETTER NEXT TIME

• Build in sufficient time for planning permission before the builder arrives

• Make sure you get on well with your builder – communicate regularly

• Stick closely to an agreed timeline

• Be as nice as possible to everyone, from the planning officer to the builder, the painter, the candlestick maker…

• Be prepared to make countless decisions

• Check out www.gov.org for breaks on VAT and environmentally-friendly aspects of a build, plus information on planning permission

• Build in a 10% contingency to the budget

• Don’t attempt to live in a full build/refurbishment (if you can help it).