One of the ways in which I amused myself during the various lockdowns we’ve endured was by treating myself to future experiences. I booked holidays, bought theatre, concert tickets, and invested in restaurant vouchers for meals that I could at that point only dream of having.

Pre pandemic, I’d been to Angela Hartnett’s Murano a couple of times, both had been great experiences. The last had been just over 2 years ago, so it was hardly a regular customer who found himself seated in the immaculate dining room one recent Friday, with his friend the Entrepreneur eager to cash in his penultimate coupon.

The dining room is nicely, but expensively decorated in creams and beiges. It feels intimate but is surprisingly spacious. The staff were friendly and enthusiastic as much from the moment we arrived to the moment we left. The joie de vie was catching and so I ordered champagne cocktail waving concerns about cost away as just so much worry smoke. 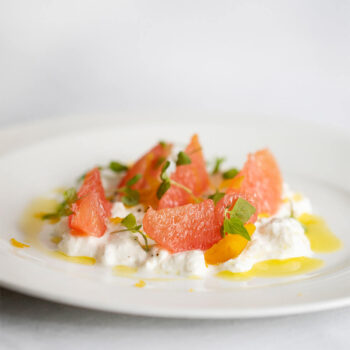 The menu is short, 4 sections, appetisers, pasta, fish mains, veggie, and meat mains, with the dessert menu coming later. You can choose to have from 3 – 6 courses, costing you from £75 – £115 per person. We settled on the 3-course option as my previous experience with fine dining suggests that the smaller a portion looks the more filling it is.

Whilst we were deciding we were presented with the first of the evening surprises, an amuse bouche in the form of sweetcorn and popcorn panacotta. This had a deliciously smooth texture, punctuated occasionally by the popcorn. The flavour was quite bold, heavy on the umami, but this was a great way of waking up the taste buds. 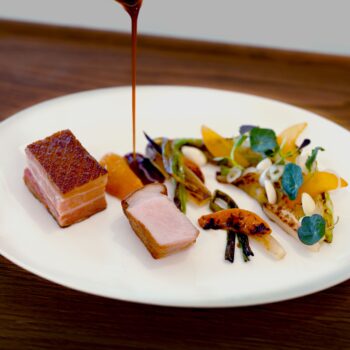 We’d both decided to skip the appetisers and concentrate on the pasta course, with me opting for the herb raviolo, and the entrepreneur going for the mussel linguine. Main course choices were the halibut and the pork. Describing the wine list as extensive an understatement, it felt like I was working my way through a world directory of wines. It might as well have been written in Portuguese such was my level of understanding and so I ended up doing something that I have rarely done before and asked the sommelier for help.

He might have raised an eyebrow when I said that the top of my budget was £60, but the wine he found, a crisp dry slightly minerally but also slightly floral was perfect for our mixture of dishes. It went well with the raviolo, the pasta of which had a slight al dente texture that was complimented by the parmesan. The flavour I seem to recall being almost like what I’d imagine the Platonic ideal of pesto being like, the entrepreneur seemed more than happy with his linguine. 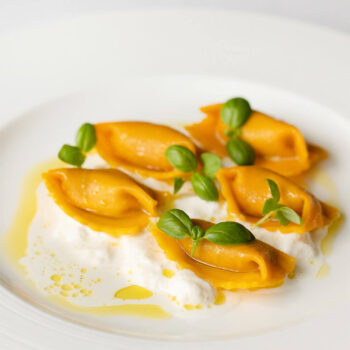 After the pasta had been cleared away another surprise arrived in the form of various breads, olive oil and charcuterie. The bread was well seasoned and surprisingly moreish, and so I had far more than I’d intended to.

We’d arrived early, at 6:30, but were in no rush. Our mains appeared at about 7:30 and the dining room which had been rather sparsely populated was now filling up nicely. My halibut was covered in crispy seaweed accompanied by grilled cabbage and a smoked eel sauce. This was nothing like what I would normally order.

This was another lot of strong flavours. The halibut itself was cooked in beurre blanc, which brought out the meatiness of the fish, the softness of the fish was offset somewhat by the crispy nature of the seaweed and the grilled cabbage. The smoked eel added a well…smoky textural overlay. These flavours were big and powerful and worked in this portion size, I don’t think however you’d have wanted much more.

My friend’s pork with sausage, smoked onions and baby gem lettuce was beautifully constructed. It was served slightly pink, but tasted again like a distilled essence of pork, you know what you think it should always taste like, but rarely does.

The mains finished we still more wine left than we expected and so as it was an unusually fine evening we asked if we could sit outside for the desserts which we did. We both choose Angela Hartnett’s signature lemon tart. This was a slender portion but was beautifully acidic and sour with a light crumbly base, a satisfying and not gut busting way of ending the meal.

There was one surprise left though to come with the bill, an elderflower jelly presented with a single strawberry each, cleaning the palate once more so prior to it being further challenged by cheap wine and cider later in the evening.

In these days though with theatre and concert tickets regularly approaching £100, and with service and food of this quality, even I would consider this worthwhile. I just wouldn’t do it to often to get jaded as that would be a tragedy.

The West End was feeling strangely under populated that Thursday evening. Whether it was the proximity of the Easter holidays, the sprightly spring weather or ... Read Feature

Zelman Meats used to be hot. About 6 years ago when I penned this review, https://nappyvalleynet.com/high-steaks-zelman-meats/ Zelman’s was the sort of place ... Read Feature