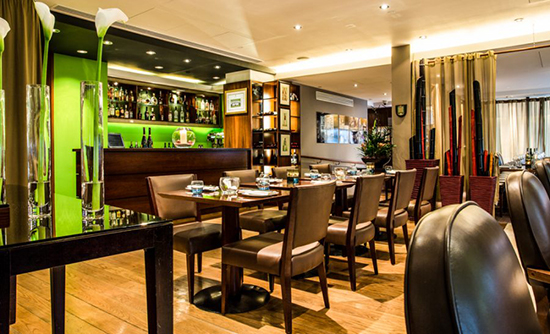 ‘So, let’s meet at the Chinese Cricket Club,’ drawled The Client. having no idea what he meant by this I wondered whether a crease and wicket been installed on Gerrard Street, or was this a night time gathering for fans of oriental chirruping insects. It transpired (unsurprisingly) that neither of these were correct, and I was being asked for lunch at a quirkily named restaurant in Blackfriars.

The Chinese Cricket Club is situated in the Crowne Plaza hotel near Blackfriars bridge, one of those rather anonymous corporate hotels which you suspect is inhabited solely by name badge wearing delegates networking by day and drinking too much conference wine by night. One the occasion of my visit there seemed to be at least 3 separate groups of these roaming the hotel’s lengthy halls. 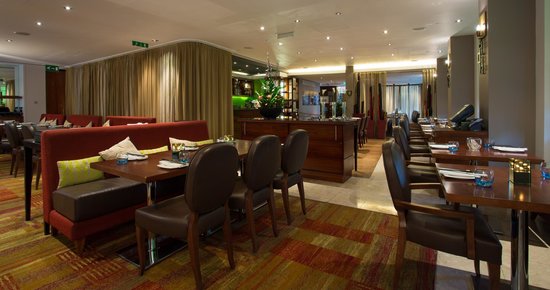 The restaurant is situated at the back and can be accessed separately. It is one of those places which when reading online reviews seems to have divided it’s audience. Having arrived early and taken stock of the uninspiring décor, I sat studying the menu thanking god that I wasn’t expected to pay for this.

I have recently dined at the Good Earth in Wandsworth Common, both establishments share a cuisine and a liking for large numbers on their menus. However whereas the branch of the Good Earth that I dined at was out in the suburbs and had rather sumptuous décor, the Chinese Cricket Club is situated in the middle of the city and decorated in fifty shades of bland.

The a la carte menu is relatively short with a number of starters and limited meat, poultry and vegetable dishes. To me it seemed like a good menu with enough but no so much choice as to send you into the depression of indecision, and a good balance of familiar and exotic.

This being a lunch wine was not an option for me, which was a good thing for The Client’s wallet as the short selection of wine ranged in price from the above average to the extraordinary. I have to say though that the selection did seem to compliment the flavours of Chinese food well. 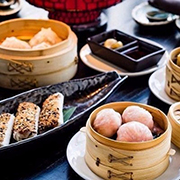 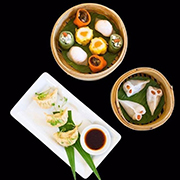 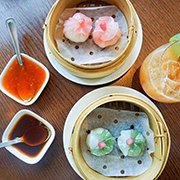 For food we ordered a starter of crispy chili squid which we were to share. Main course of pork belly with sticky rice, kungpo chicken and some jasmine rice. The squid was in the words of Craig Revel Horwood a-maze-ing, fresh, crispy and seasoned to perfection.

The pork belly was served Chinese style, looking more like bacon wrapped around a ball of sticky rice. Here the flavours with slightly more pungent but delicious. The kungpo chicken was I think the best I have ever had outside of China, and I have to say that as a fairly frequent visitor to China this was one of the most authentically tasting Chinese meals I have eaten outside of it. 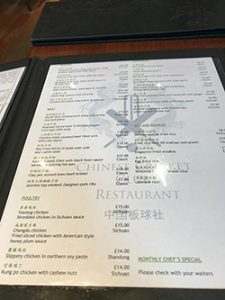 Service was impeccable. Whilst never being intrusive, a helper would seem to miraculously appear by our table whenever we wanted something. I suspect that there was a motion sensor pointing at the chop sticks.

You would think with the superlatives I’ve been throwing around in the last few paragraphs I’d also be giving the meal here the big thumbs up. I can’t quite bring myself to this though.

As I said earlier online reviews are divided, many talk about the brilliance of the food contrasted with the banality and slightly tatty air of the décor. I’d have to agree and say that the ambience was felt especially lacking when contrasted with the cost of the food. Additionally subsequent visits to the web site revealed a special lunch menu available at a significantly reduced cost per head compared with the a la carte. This wasn’t mentioned to us when we dined, something that always leaves a sour taste in  my mouth.

The food here though is great, but it is the perfect location for a proposal of a business rather than marital nature. My hope is that I can find somewhere which combines this quality of food and service with ambience and décor. Anyway till the next time.

Let’s hear it for the Bois…

Voucher dinner at the Boisdale. The Boisdale is a mini chain of Scots themed restaurants thinly spread west to east across London, ranging from Belgravia ... Read Feature

Simpson’s in the Strand

It’s Chrisssstmas, or at least it was when I was writing this review. As is traditional, I’d had lunch with my friend, Captain ... Read Feature

‘Now you won’t be telling anyone about this place?’ asked my friend the entrepreneur, as accompanied by his partner, the delightful Sarah made our ... Read Feature