Search Features
Search Conversations
You are here: Home > Latest Reviews & Features > Down where the Hobblings live – join in and be part of the tale 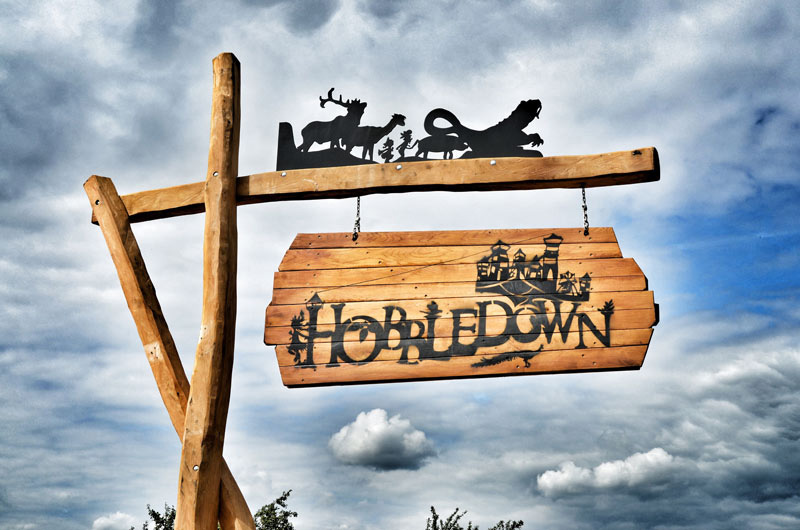 There was no hobbling on the way to Hobbledown.  No dawdling either.  Just full pelt excitement as we headed out of town and down the oh so familiar A3 towards an enchanted world that promised excitement and play.  There was plenty of that in the car (noisy too), so we were very relieved to arrive, just 35 minutes after leaving Wandsworth Common, pulling into a large car park with signs warning of ‘free range children’.

Through the entrance gate, and they were off!  My two boys were darting and dashing around, taking in all the signs, maps and activities on offer.  They were reined in briefly for a hastily gobbled up packed lunch which we ate in the sunshine at chunky and clean wooden tables where, between mouthfuls, they disappeared into the neighbouring mini Hobbledown Village, complete with shops, stalls and more fun signs to play with, or peered over the low walls to admire sleeping rabbits and nibbling guinea pigs. 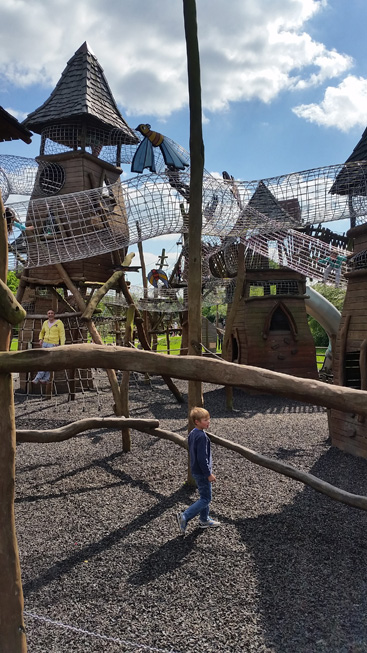 Having studied the map, we headed straight for the Crytallite Mine, filled with green gems to be unearthed from the sands – a very clever idea whereby children can collect a lollipop on their way out
if they manage to find 20.  So the area, beautifully landscaped with buckets for sand-dredging, wooden fences here and there to meander through, a mine to explore and a lovely wide and gentle slide to slip down if the mood should take you, was littered with parents around the edges, sitting comfortably on the grass having a natter or a quiet look around while their little ones toiled in the sands, their eyes firmly on the prize (the lollipop, in case you’d forgotten). 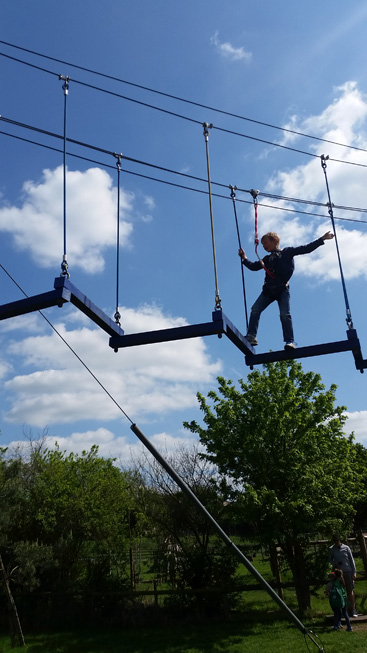 For my two boys (aged 7 and 9), the temptation just over the brow of the hill was too much, and after discovering a small handful of gems each and despite the protestations of their dad who was having almost more fun than our children, they dashed on to the next part of their trail, the Jumping Pillows, and beyond, the Climbing Towers and Aerial Adventure Course.

Shoes off and discarded, they climbed the gentle slope to the top of the bouncing dome and proceeded to bounce, collapse, giggle, wrestle, roll and race from one to the other and back again.  With whoops of delight they sprung off and, grabbing their shoes on their way past, whizzed over to the brilliant Climbing Towers. A wonderful muddle of tubes, towers, tunnels and slides made for hiding, sliding, jumping out and disappearing again, popping up here, clambering up there.  Children of all ages seemed to be loving it, though there were warning signs for little ones: Beware: Tunnels inside which are way too scary if you’re under 5! I was too big to fit but my boys assured me they were, like, totally pitch black, so cool, just awesome…

And then on to the Aerial Adventure Course.  You have to be at least 1.3m tall to be harnessed up for a daring trail similar to other tree-top adventures you may be familiar with, and my youngest stood up as straight as I’d ever seen him and was allowed through (just).  Despite his diminutive size, he tackled the course with gusto and whizzed across confidently and happily, finishing with a zip wire and a big smile while the rest of us looked on admiringly from terra firma.  Next stop was another harness for the climbing pole followed by abseiling down, or in the case of my children, climb as high as you have to before throwing yourself off into mid air, held reassuringly by a wire which edges you gently back down to earth. 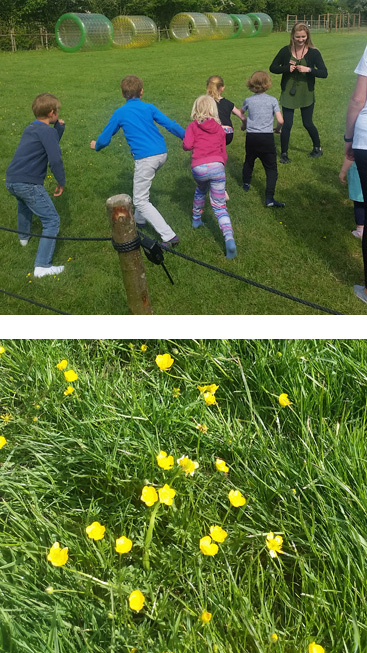 More fun in an afternoon surely couldn’t be possible, but then we spied giant Zorbs in the field next door.  While adults can be harnessed up to tackle the Aerial Adventure Course for themselves and admire the many animals we passed along the way (did I mention feeding time for the otters, meerkats coming to say hello, the softest bunnies in the world to stroke, tropical and incredibly feathered birds, goats, sheep, donkeys, wallabys and alpacas?), we’re just too darn big to be allowed to have a go at the Zorbs.  This was a lot of fun-picture the scene.  A sun-drenched field on a springtime Saturday afternoon and 6 giant, brightly coloured plastic wheels ready and waiting for the next batch of children to be unleashed upon them.  Well managed and run, the lady with a whistle and stop-watch gave each wave of kids a ‘Ready, steady, go!’  You should have seen them run.  Once inside your Zorb, the idea is to run to make it roll (as my older son said, just like a hamster on a wheel), but half the fun was rolling, wriggling, somersaulting, giggling. 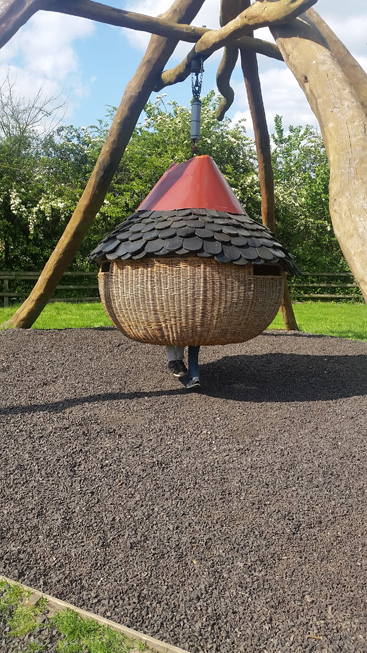 Rosy cheeked and sparkly eyed, they couldn’t resist just one more go on the Climbing Towers and a chilled out swing in a pot that resembled a little floating house before we completed the loop through the farmyard, walked hastily through the shop stopping only for water (so mean!) and back out to the car, jibber-jabbering all the way about the most cool, most awesome, the best, can we come again, kind of place in the world…

For us, it was a resounding success.  For smaller children it would be too, and I saw plenty of first hand evidence of that.  It’s a very happy place to spend some time with your children. The animals on every corner, the lovely fresh air, the endless fun and adventure on offer – there’s even an indoor Play Barn for rainy days.  And I haven’t mentioned the Hobbledown mysterical theme.  As the price list tells us, we all become Hobblers (under 2), Hobblings (over 2), Scholars (18+) or Professors (65+) for the day. It’s a fun theme and the design of the whole park is in keeping with it. There’s even a children’s book, Hobbledown, which is available in the shop. The staff, who all had ‘Hobbling’ before their actual name on their badges, were very friendly and relaxed.  There was an air of fun, of calm among parents and somehow otherworldliness. Perhaps that was because we were out of town for a while, admiring the green fields and the buttercups, the occasional passing alpaca or gently rolling Zorb.

Recently we featured some top tips from Amélie’s Follies on the best underwear to make your outerwear really shine, and even the idea ... Read Feature