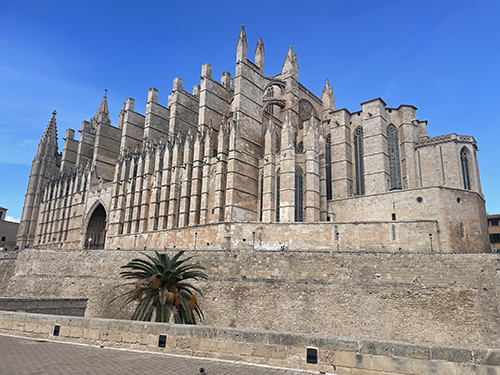 It was 25 degrees centigrade, not a cloud in the sky and I was happily sipping on one of the best coffees I’d had in weeks. Around me the bustle of Palma’s old town was in transition from post breakfast to pre-lunch, whilst my body hungrily gulped caffeine attempting to recover from waking at 4 am. I shouldn’t be here I thought, well I wasn’t planning on it.

Back in the dark days of the March lockdown, when day followed day with nothing really to mark their passing, one of the ways I’d kept sane (well sort of,) was by planning out things to do when times got better. I’d booked theatre & concert tickets, made restaurant reservations, and most ambitiously booked travels abroad. 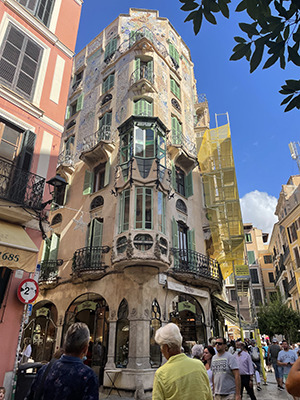 I’d always had a yen to spend more time in Corfu, having briefly visited it on a cruise a couple of years ago. Back in March it felt like nothing to spend a few quid booking a dream on Ryanair, and then to be honest I didn’t think much of it until a couple of weeks ago when I suddenly realised it was almost time to go.

When it became apparent that I really could go away, I spent sometime ummming and ahhhing over whether I’d really do it. Not going would only cost a few quid, that I’d already spent whereas getting on the plane would mean additionally the cost of the hotel and the return PCR test. I’d resigned myself to staying put in blighty when about a week before I was due to board the plane I thought to myself, why bloody not. Who knows what’s going to happen, we might be locked down again, travel might once again be banned also the weather’s bloody depressing why not head off for the sun?

And so that was my plan, which I nearly stuck with. Then 2 days before departure, I thought ah hah why not check on Corfu’s weather. The symbols that popped up on the forecast were of the sort that weathermen dream of. Clouds so dark that they seem to suck in all the surrounding light and more rain drops than I thought you could fit into one place. Well, that was disappointing, but within minutes and at the cost of only a few hundred pounds I was off to Majorca instead.

Most of that money was spent on securing a different hotel, and as my packed flight lifted off from Southend airport, I could understand why. Demand was off the roof.

To get into Spain presently, you not only have to be double jabbed, but as with many other countries you need to fill out a passenger locator form. This lets the authorities know where you are staying in case there are any issues. Arriving in Palma airport your documents and temperature are checked as well as your now Brexit passport being stamped. I don’t know if I was lucky, but even so I was still out of the airport about 35 minutes or so after landing. 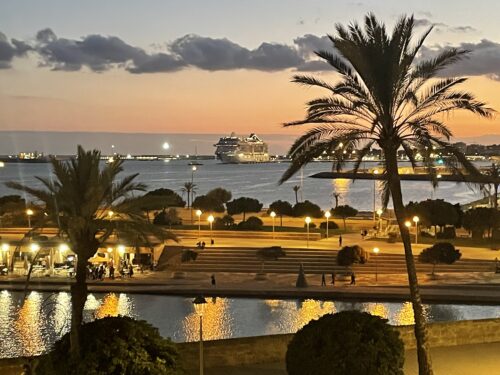 My hotel, the UR hotel Palacio Avienda, was situated near the old town and had in a previous incarnation been a cinema. This was evident in the many movie stills to be found decorating the lobby and restaurant as well as the heavy drape curtains which you felt were just as likely to reveal Pearl and Dean as Palma if pulled back.

Palma itself is to me an architectural gem. A cleaner more accessible Barcelona, with nice bars and fewer bag snatchers. I spent many happy hours wandering around the gothic old town having too many drinks and tapas. Palma cathedral is beautiful, and world renowned, but the city has many other smaller churches that in their own way are just as attractive. 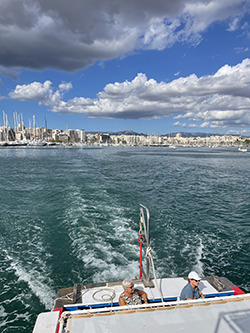 The waterfront of Palma is dominated by the marina, so full of super yachts that you begin to feel that ever other person must be a member of the superrich. Along here are the late night bars and restaurants so beloved of the yacht set, where the party doesn’t start till you’d normally be going to bed and the prices resemble more what you’d usually pay for furniture than you’d pay for drinks.

I was only in town for 3 nights, but I quickly developed a routine, go for long walks or activity during the day and then later pop up to the roof bar for a pre-prandial cocktail before wandering off to find more alcohol and dinner.

My days were spent exploring either on foot, bus or boat. I took the tour of Palma, which I recommend as it showed me places that I wouldn’t have found or even know about on my own and that I could then explore at my own pace.

On the last day I took a boat trip that I thought would be a relaxed tour combined with some sea swimming. It transpired I’d booked myself on to a party boat, and even worse it was a party boat that wasn’t allowed to sell alcohol and even even worse, I was about the only person who’d brought some with me anyway. 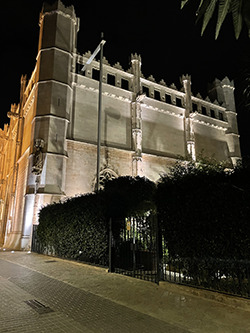 Surrounded by stag and hen parties sucking down beer and vodka as there were medals at stake, I felt at least a million years old. We did at least get to swim in a very nice cove, though to the standard bearers for physical beauty surrounding me I must have looked like a shaved ape who’d come runner up in a potato look-a-like contest. I’m just glad none of them vomited when I removed my t shirt to dive (climb) into the sea.

Dining on your own on a holiday island is of course rather solitary. Each night it took me a few drinks to work up the courage to join the queue for one or the other eateries dominating the squares of the old town.

One thing that surprised me was the lack of smoking outside any of the rather large number of bars I visited for (of course) research purposes. Smoking has been effectively banned even outside bars and restaurants in order to arrest the spread of COVID. This has been in force for a while now, and you can see adherence breaking down, with many nicotine fiends either going only a few steps away or even just standing behind their chairs to light up. As the night went on this broke down further with many not even bothering to do that and starting to puff away where they sat.

The meals I had were all good, though none was spectacular. There are many noteworthy eateries on Palma, I just didn’t feel like visiting them on my own, especially after I received rather short shrift from one on the first night having asked to dine solo. That was about the only time though that someone was rude. 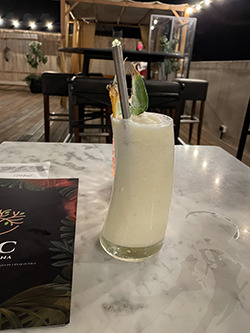 Booze was plentiful and cheap anywhere but the party boat, where I felt like the only sober person on the night bus. My favourite though was the hotel’s cocktail bar, where as well my pre-prandial drink on all three nights I popped up for a nightcap or two

The cocktails were the most expensive drinks I purchased anywhere on the island and the best. They also had healing powers as for someone who suffers from insomnia, I slept like a baby for all three nights.

The weather was great for the entirety of my trip and though it was only a brief one and just a few days ago, I’m already plotting a return in the spring.

Murano, Mayfair One of the ways in which I amused myself during the various lockdowns we’ve endured was by treating myself to future experiences. ... Read Feature

If you require NappyValleyNet to delete your data please send an email to Annabel@nappyvalleynet.com referencing the username and the email address.   Thank ... Read Feature