THE GENDER GAP  –  Do boys and girls do better academically when they are taught together or apart? Sian Griffiths , Education Editor of The Sunday Times, unpicks the pros and cons. 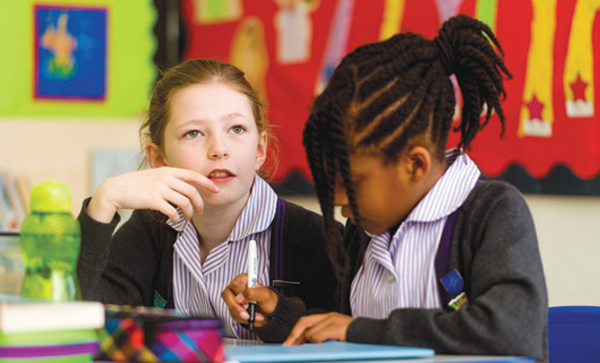 Single sex or co-ed? It’s one of the hottest debates in education. On one side of the debate are the head teachers of single-sex schools who assert that girls and boys get better exam results when they are educated away from the distractions of the opposite sex. On the other are heads of coeducational schools who say that girls and boys need to learn to work together since that is what they will have to do in universities, careers and life. Without this skill, they say, pupils can flounder after leaving their protected classrooms.

Suzie Longstaff, Headmistress at the feepaying Putney High School, is firmly in the first camp. Longstaff has taught in single sex and coeducational schools. Her experience has convinced her that boys and girls do best when taught apart. “I didn’t think this before I taught in these different schools,” she says. “It’s based on what I have learned.”

Girls’ schools are constantly experimenting with new ways of teaching and giving their pupils skills to succeed in the workplace, says Longstaff, who argues that girls respond well to supportive, cooperative classes, while boys thrive on competition, banter and a direct teaching style. Girls’ schools are also good, she says, at imparting confidence. While they are, on average, more successful academically than boys, girls are also thought to be less sure of themselves and less willing to take risks. At Putney High School, sixth formers have been offered lessons in stand-up comedy to improve their ability to think on their feet, especially in the run-up to university interviews. “The comedy lessons really built their confidence,” says Longstaff. “Girls here have a strong can-do attitude. They are imbued with a sense that there’s no glass ceiling they can’t break.”

Other girls’ schools have taught girls to network and make after-dinner speeches and toasts and some have encouraged girls to set up Facebook groups to keep in touch at university and later, in their careers, to support each other at work as men have traditionally done when they gather in pubs and gyms.

According to Tony Little, the former Headmaster of Eton College, boys too do better when educated away from girls. Little says that boys in good single-sex schools are more likely to take English literature A level, play in the school orchestra and take part in drama – all activities more likely to be the domain of girls in coeducational schools. They also feel freer to express their emotions without fear of ridicule. Teachers in boys’ boarding schools like Eton are trained to recognise that when teenage boys get angry it is a sign of emotional release and stress rather than bad behaviour.

DID YOU KNOW…
…THAT HALF OF INDEPENDENT SCHOOLS IN THE UK ARE SINGLE SEX?

Longstaff says that she believes singlesex schools work best for both boys and girls “because it frees them to be themselves.” But for Julian Timm, Director of Admissions at Trinity School – a boysonly school up to age 16 – such arguments do not outweigh the benefits of learning alongside the opposite sex after the age of 16. “The emotional maturing of boys and girls happens at very different rates,” he says. “It’s difficult to have a mature 14-yearold girl in the same class as an immature 14-year-old boy.” He also believes that it takes social pressure out of the school environment. “But post-16 it’s a more difficult argument to make. Socially, it’s not the best preparation for children to be exposed to just one gender throughout their education.”

Trinity changed to co-ed in the sixth form five years ago and while the school has never had a testosterone-fuelled atmosphere, Timm believes that the presence of girls gives a strong message to boys that they are their equal. “It makes boys up their game,” he says and also exposes boys to different ways of thinking. “Girls spend time exploring ideas and empathising whereas boys want to get to the right answer quickly.”

When Clarissa Farr, High Mistress of St Paul’s Girls’ School, revealed that some of her alumni were struggling in male dominated environments such as the City, some saw it as proof that single-sex education is deeply unrealistic. Farr has called for a clampdown on the lad culture among City workers – which she described as sexist – and said that her high-flying pupils were leaving “some of the most sought-after companies in the country” early in their careers.

“Sexism is driving girls out,” Farr says. “They do not want to stay. Several young women have spoken about being mocked by their managers because they have drawn attention to a laddish culture – of which the central ingredients are sexist attitudes, drink and football – which prevails among young male employees and which excludes them.” Heads of coeducational schools say that had the girls been alongside boys throughout their school days they would be able to coexist in mixed workplace environments.

Perhaps a good compromise in this heated debate is the so-called “diamond model”: boys and girls are at first educated together, diverging into separate classes in the teenage years and then coming back to be taught together in the sixth form.

The key thing parents should try to do is to choose the right school for their child, says Trinity’s Timm. “You can’t shoehorn children in,” he says. If it turns out to be a single-sex school that’s a bonus. “We prepare children to be happy and emotionally balanced, then come the grades”.