Go Your Own Way

When teenagers are in the midst of their GCSEs another major challenge looms before them, where to go for Sixth Form. The options are binary, should they stay where they are or head for pastures new?

The pro-stay lobby sets out persuasive arguments for staying; being able to enjoy the familiarity of teaching practices, the established friendship groups and teachers, for general continuity and security and being able to hit the ground running in their efforts to secure top grade A-levels and a better chance of securing a place at the university of choice.

On the other side of the fence, the anti-stay lobby highlight a more independent and adult learning experience in terms of facilities and the range of co-curricular activities, being able to face new challenges as a rehearsal for university and often being given a wider choice of qualifications to study.

It’s a tough decision to make as there are advantages common to both. For example, both offer smaller class sizes, seminar- style classes which mimic the university experience, opportunities to develop leadership skills, more individual attention from tutors, enrichment programmes and a robust UCAS programme to support their onward journey to higher education.

“They would leave if they thought there was a better option out there,” asserts Laura Cottrell, Director of Admissions & Bursaries at Latymer Upper School. “At Sixth Form pupils earn certain rights and privileges, such as going out at lunchtime, private study time and a more self-directed learning style. It’s when you really get to choose and pick all the fun stuff the school offers.”

Inevitably some pupils do leave, to a co-ed if they have been in a single-sex senior school for example, or to a more cocooning boarding school environment, a larger sixth form or a specialist Sixth Form college where the cohort is more international. 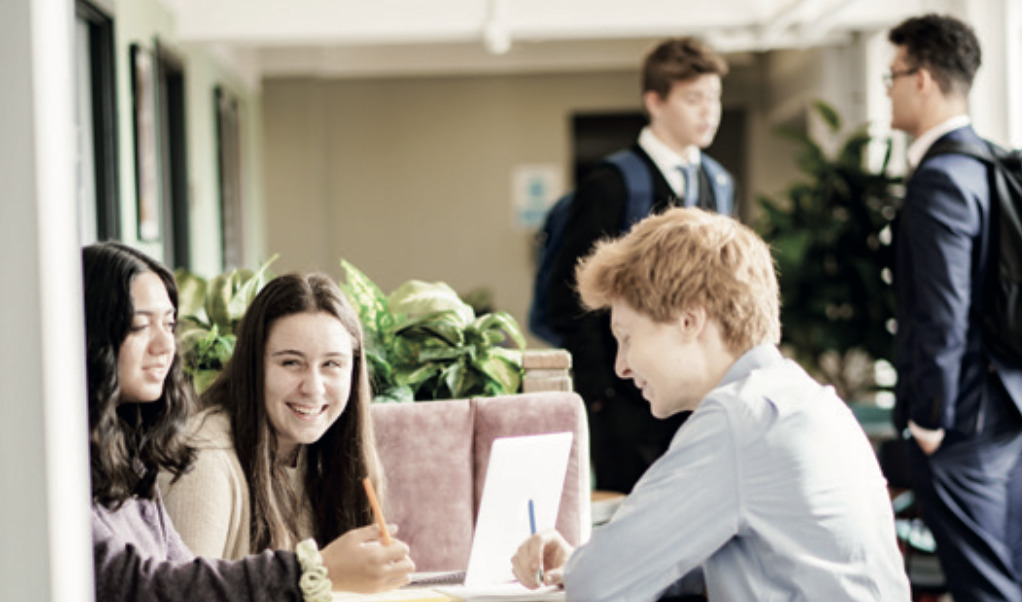 TOP TIPS FOR SIXTH FORMERS
For many students the Sixth Form is the most rewarding period of their school life. In these final two years, not only do they have the chance to focus on the subjects that really interest them but also to take on positions of increased responsibility and leadership.
• Makesureyougetinvolvedinco- curricular activities but try to focus on leading something related to your interests. If there is something missing from your school’s co-curricular provision, see if you can set it up
• Start researching university options early in Year 12. It may sound a long way off but platforms such as Unifrog are a great starting point and will help you refine your search
• Show your teachers how diligently and consistently you can work. They want the very best for you, and they’ll be writing your references at the end of Year 12!
Source: Wetherby Senior School

Girls make up a third of the 300-strong Sixth Form at co-ed Trinity School, for example.”Many are attracted by the co-educational offering,” says Antonia Geldeard, Deputy Head and Head of sixth form. “Certainly advocates of mixed schooling have long said that this model offers a real-world experience: the classroom is more diverse, and this is great preparation for university and real life.”

However, statistics suggest that the majority of students decide to stay where they are. Some 85% of the Year 11 cohort at Bolingbroke Academy stay on explains Chloe Orchin, Assistant Principal, Director of Sixth Form at Bolingbroke Academy. The five or six pupils they lose every year is usually because “they want a bigger Sixth Form.”
At Wimbledon High School it’s a similar picture as between 85%-88% of pupils are retained. Argues Head Fionnuala Kennedy: “Getting into Wimbledon High is really difficult so leaving is a gamble.“

At Burntwood School the retention rate is 80%, at Putney High around 92%, at Alleyn’s 95% and at Wetherby Senior School around 90%.“We only have about 8-10 pupils who leave us at the end of Year 11,” says Latymer’s Laura Cottrell. “Nearly everyone stays on and we add in a small cohort, typically of 20-30 students, at 16+.”

She believes that the attraction for joiners at 16+ is the school’s bursary programme, tailored careers, a specialist sixth form team and US university connections. “Typically, 15-20 students will head overseas for their uni courses, to Yale, NYU, Brown, Georgetown and Milan’s Bocconi,” says Cottrell.

Cottrell also believes Covid has had an impact on the decisions students make. “Pupils are staying in the environment they’re familiar with because of the uncertainty created by the pandemic.” 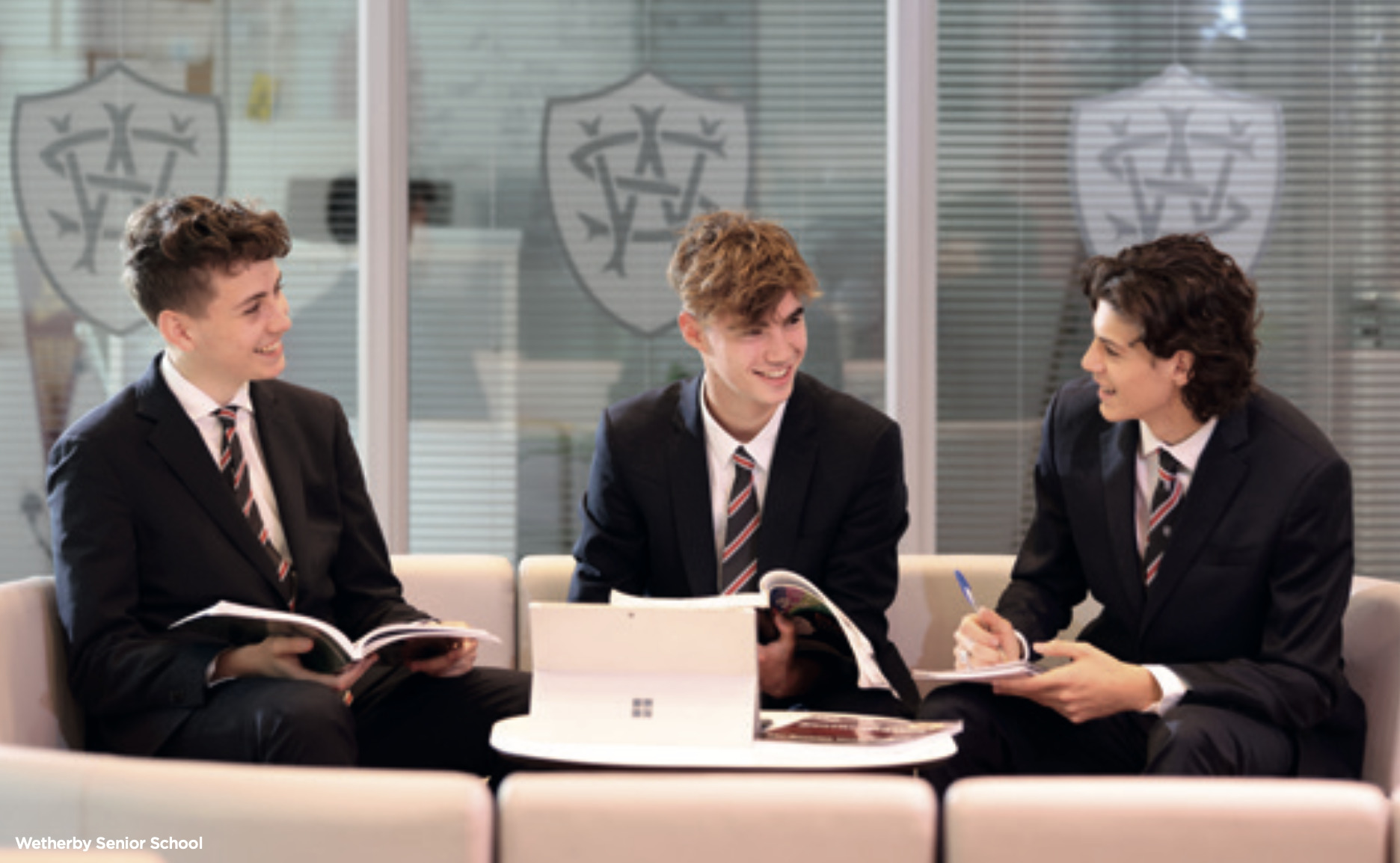 SIXTH FORM MOVE
Staying where you are for Sixth Form can provide continuity as you transition to A-level study. Your teachers know you, and you are within familiar surroundings, helpful as you move to the faster pace and academic rigour of A-levels. You may also have established a peer group with whom you are comfortable.

Moving to a new Sixth Form can provide fresh opportunities, both personal and academic. You may find a greater range of academic subjects and co-curricular activities on offer. You will have the chance to develop interpersonal qualities and may find the change provides a new sense of motivation.

If you are unsure, arrange a tour or attend a virtual event of schools or colleges that have captured your interest. Hearing from the Sixth Form teams will help answer some of your questions and help inform your decision.

At Sydenham High, the school goes out of its way to settle-in new Sixth Formers. In Year 10 there is a taster day, and after GCSEs are completed in Year 11, all incoming Year 12 students are invited in to meet their subject teachers and peers to ease any transition into Sixth Form.

The preparation continues into Year 12, explains Rebecca Parrish, Head of Sixth Form: “At the very start of Year 12 we have a dedicated induction day for all of our students before term starts, so that they are fully prepared for the academic rigours of A-level study. We also have a group trip to Paris at the end of the first week in September where we focus on team building activities to help strengthen friendships and relationships with tutors and the Sixth Form team.”

In contrast, what is the attraction of a new learning environment? At DLD College London, an independent 14-19 co-ed school offering GCSE, A-level, IFP for international students and BTECs, it is dependent upon the personality and maturity of the student, says Principal Irfan Latif.

“The decision on whether to stay at the same school for Sixth Form or move to a specialist college really boils down to what the support needs of that student may be. It is vitally important to study somewhere where you know you will be cared for and where you will be challenged.

“There is a whole host of different reasons why students may opt to move to a specialist Sixth Form college, with the one thing uniting all their decisions being the need for a challenge,” says Latif. “Some students have had difficult personal circumstances and they want a fresh challenge, others want to challenge themselves academically and are keen to attend the best universities in the world.”

James Barton, Head of Admissions at MPW, another independent fifth and sixth-form college, adds his reasons for why students move: “We are bridging a gap between school and university. Also, it’s our variety of subject choices and a wish to move home and independence though this last point always need contextualising as independence in a sixth form college doesn’t mean rules disappear, it is simply a requalification of how you are treated.” 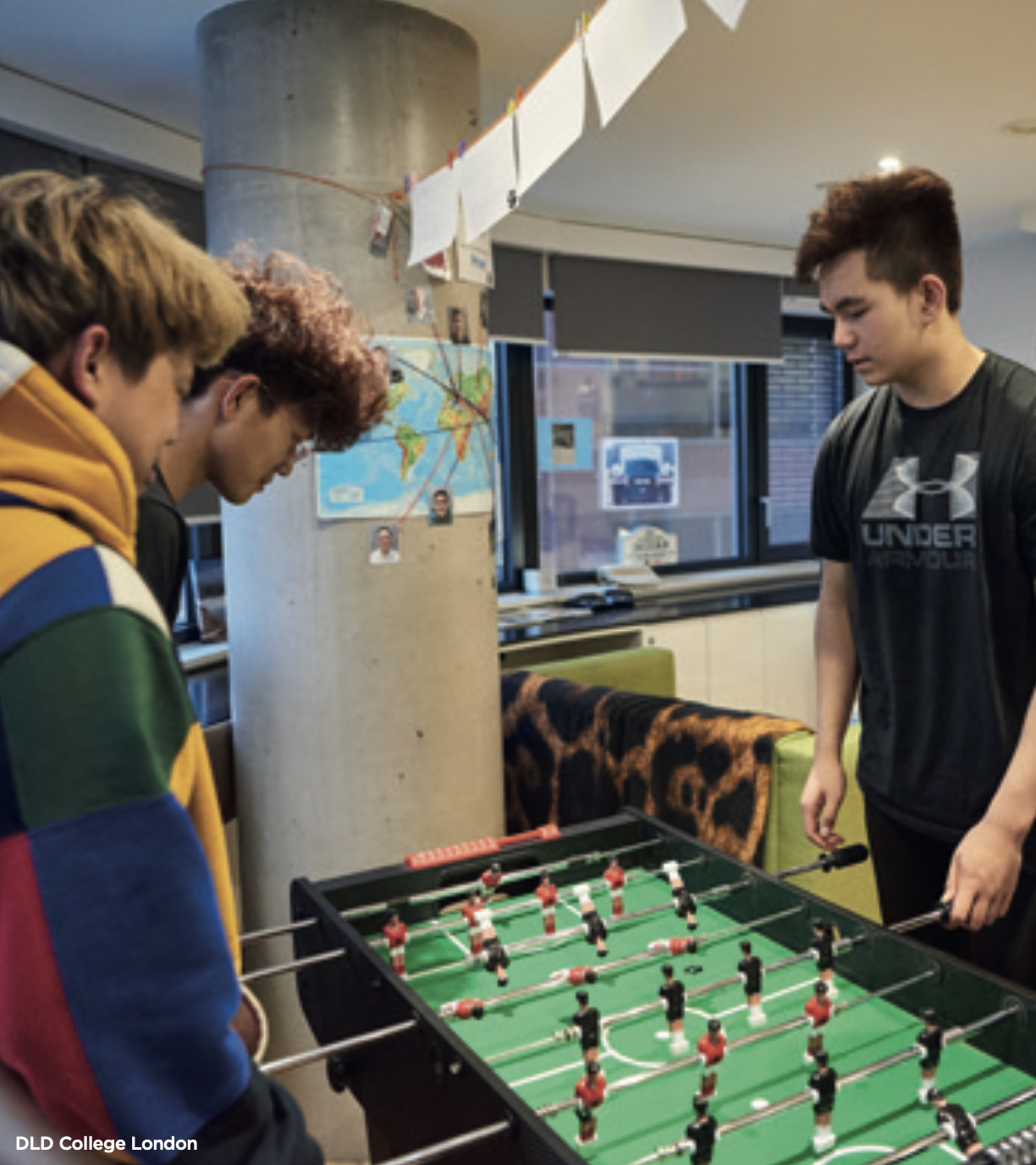 SIXTH FORM: WHERE TO GO?
DLD College London is an independent 14-19 co-educational school, specialising in supporting students who are at an important point in their progression. Our infrastructure is built around supporting students with individual attention to their educational and pastoral needs. We encourage students to be autonomous, which is something they will need if they progress to either university or employment. Our curriculum is broad and we have many subjects and programmes to choose from, including BTEC , A-level and IFP for our international students. We have a diverse student body and a multi-cultural and global atmosphere, preparing students for their future working lives. We tend to find that our learners adjust very well to university because they are already used to attending a school in a major city and they are also used to working autonomously.
Source: DLD College London

Ultimately, DLDs Latif believes that a specialist Sixth Form college “offers students a great deal more autonomy and this is one key reason why this option may not be for everyone.” Students who have learned self- worth and self-respect can eschew uniforms, and students and teachers are on first-name terms. By working autonomously Latif thinks that students adjust well when they progress to university.

On the flip side, Bolingbroke’s Orchin argues that Year 11s are not automatically adults and that it’s too early to take the scaffolding away. “It’s their last two years of growing up and we take away that scaffolding slowly so it’s less of sink or swim.”

Bolingbroke offers what it calls structured independence, with a support system and certain freedoms, such as only arriving at school for lessons rather than when school opens, a designated quiet study area on the mezzanine level and a Sixth Form café.

Orchin believes it’s a classic myth that teaching at Sixth Form has to be different. “Good teaching is good teaching,” she declares. “Our teaching style doesn’t change but the content does change as it’s much tougher.” She cites having to read outside the curriculum, engaging with academic societies, learning about critical thinking, and listening to guest speakers as intrinsic to a tougher curriculum.

As a through-school with children starting as young as four, Wimbledon High School‘s Kennedy believes it is important to make the Sixth Form experience different.
“The relationship between students and teachers changes; it’s a more equal relationship,” she says and adds that a brand new Sixth Form block opens in 2022 with gym, café, library, courtyard, break- out space and a centre for the school’s partnership programme. 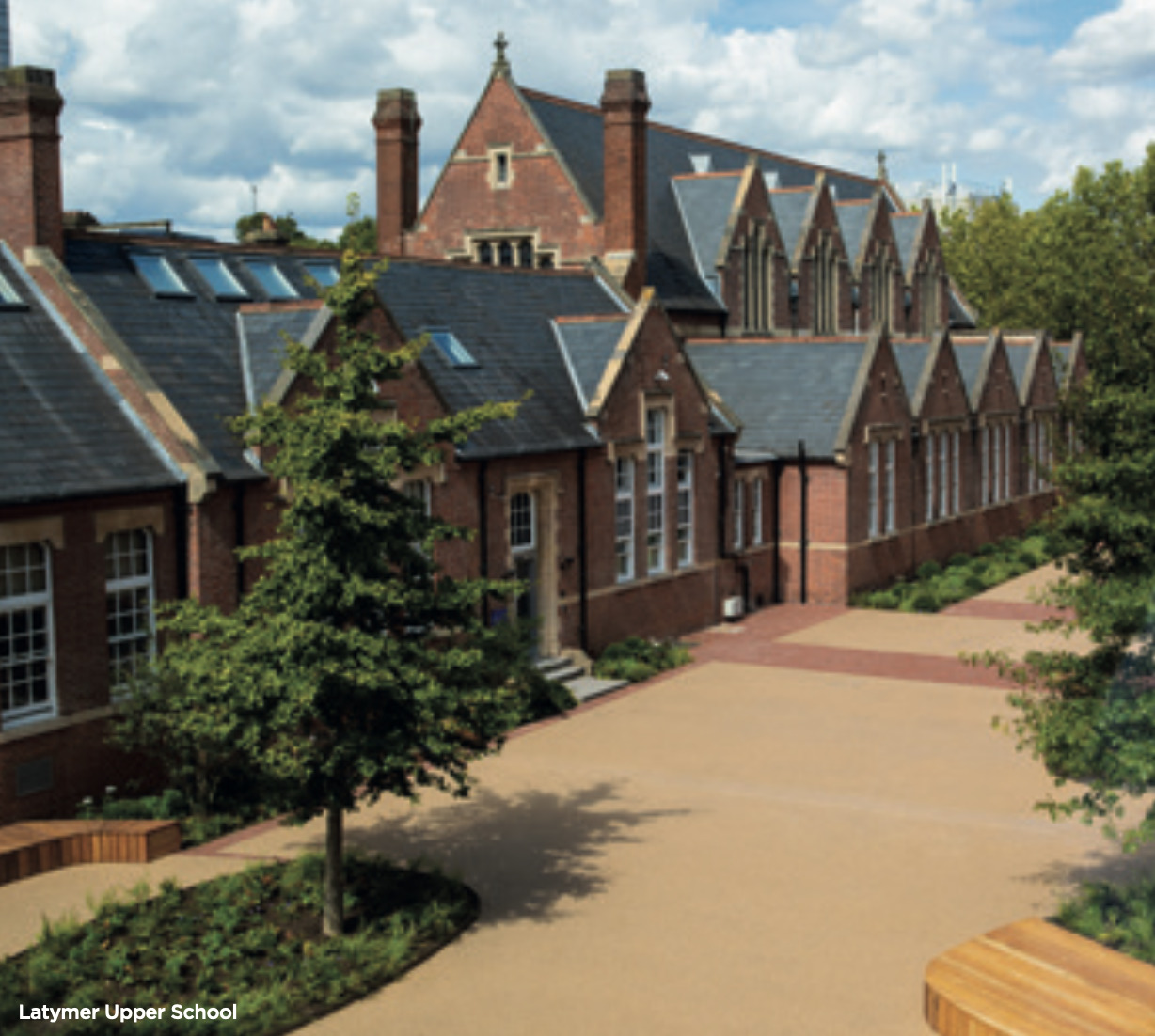 Dena Deedat, Head of Sixth Form at Wetherby Senior, cites the small class sizes “where the teachers know every pupil,” as good grounding for their A-level journey and beyond. “I am proud of the university destinations secured by our pupils. Roughly two-thirds remain in the UK and around a third seek places in the most competitive universities across the USA, Canada and Europe.”

Sixth Form choice is clearly a subjective issue and factors affecting that choice include the maturity of the student, their academic prowess, the qualifications they wish to study and their ultimate goal of university and career. The good news is that there is an environment that will be the right stepping stone for every pupil.