What do those two words mean to you?

If you’re anything like me it’s images of American kids being shipped away for long summer holidays and whilst I’ve never been, I’ve seen enough Hollywood movies to think I know what goes on.

But do you know we also have summer camps in Europe?

And if Camp Suisse is anything to go by, they’re actually quite brilliant.

I first heard of Camp Suisse (CS) when they contacted NappyValleyNet and asked if we wanted to experience their Torgon camp. A quick check around the office ruled out myself and Charlotte (too old for their seven to seventeen year age range) and although Mr NVN often acts like a child he also wasn’t going to make the cut age-wise, so that night I asked my daughter if she fancied the trip. I took her squeals of delight as a yes.

Keen for her to experience the full summer camp programme I booked a week away with unaccompanied flights. Even though her twelfth birthday was a distant (ish) memory she’d never travelled solo to a foreign country and, as a result, I’m not sure who was the more nervous about her forthcoming jaunt. 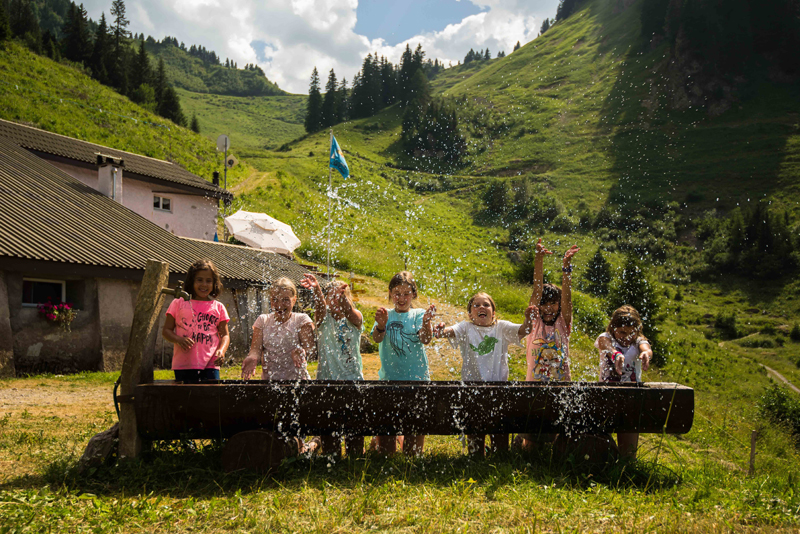 The Departure
D-Day arrived and after check in at Heathrow we handed her over to a helpful SwissAir official who took her from the desk all the way to her gate.  She suddenly looked both very grown up and very small. I felt surprisingly tearful waving her off.

Four hours after our airport goodbye we received a text from Camp Suisse in Geneva stating that she’d arrived and moments later another from Grace telling us she was on her coach heading up the mountain and then, after that, nothing.  But we needn’t have worried.  The call, when it came through, was effusive.  She was loving it, the people were ace, the food amazing but she was so so sorry she had to go.

Then the phone went dead. I’ll admit I was starting to feel a little detached but then, as if reading my thoughts, an email arrived from CS HQ pointing me in the direction of their daily blog, photo gallery and private FB group. Those disjointed feelings quickly disappeared; I could now see exactly what she had done, plans for the following day and, it quickly, transpired, just how much fun she was having.

Accommodation and Food
The camp is situated close to Lake Geneva and the children stay in purpose built cabins in a private camp. Bathrooms are shared between three or four campers with meals table served in a dining hall. Food, according to my daughter, was “ace” with burritos, chicken pie, lasagne, Nutella, toast, cereal, cookies/ice cream and fruit all on the menu. I’m pretty sure the lasagne and burritos weren’t for breakfast (!) but in a ringing endorsement of their kitchens this was all the information I could elicit aside from her steady stream of “aces”

Activities
The campers were divided into groups with two professional leaders per ten children and these adults guided, coached and mentored the children throughout their stay. The international mix was a real eye opener, especially for a day-school pupil from SW London with children from China, Russia, Egypt, France and more sharing bedrooms and dining tables. 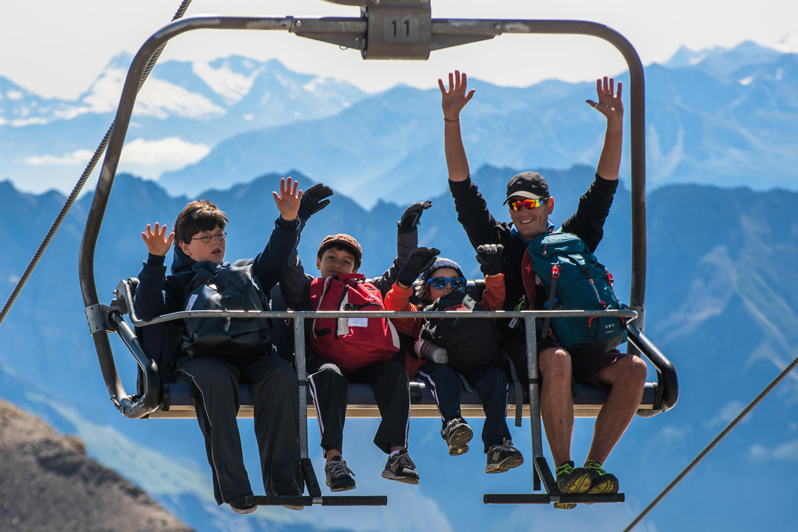 The days, Grace told me, quickly settled into a routine with breakfast followed by an activity followed by a break then another activity before lunch. The afternoons would be filled with more activities plus some language lessons then back to camp for an evening meal and then downtime and the infamous “shower hour” (see below).

Day-time activities were phenomenal: archery, glacier dog sledding, snow-sledging, lake swimming and even a roller coaster were packed into the sunlight hours with bingo sessions, movie and hot chocolate nights and even a prom, filling the gaps post shower hour.

Communication
A week away from home is a long time, especially when children are unaccompanied and travelling on their own. Communication, as such, is essential both from a nervous parent perspective and so the campers know what to expect. In the days leading up to departure we were sent a steady stream of missives ranging from the informal (a FB Group set up for “campers” to share details) to the educational (which language would Grace study whilst away), to the practical (kit lists and housekeeping rules). And it was the latter which caused the only consternation.

Shower Hour
Phones are banned, except for one hour per day during the aptly named “shower hour” and in our hyper-connected world I was really looking forward to hearing how she coped “off grid.” To say Grace was little shocked at the lack of WiFi and cell coverage would be an understatement, however, and this for me was one of the most wonderful aspects of the whole trip, she didn’t miss it one bit.

When did you know it was going to be brilliant?
I asked Grace this question on the way back from the airport.

I’d picked up an exhausted but happy twelve year old who seemed to be so much calmer than the nervous teenager I’d dropped off. Her reply was “within an hour of arriving”, when she was exploring the camp with her new friends awaiting the arrival of her fellow campers who were on later flights.

“Everyone was lovely and fun,” she replied, “but calm” and I think this is the secret to the whole Camp Suisse experience. It’s so well organised, so well structured but not at all manic (unlike some activity trips) and that means that our busy over-stimulated children can just get on with having fun and her biggest endorsement?  “I didn’t even miss my phone.”

Interview with Julie from Camp Suisse by Grace H (aged 12 and a half!) – all the questions the interviewers own! 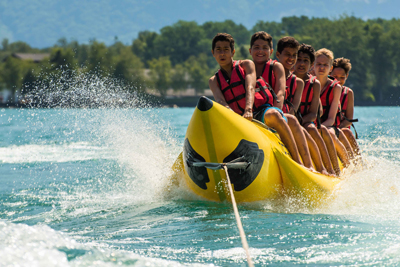 Are you planning on expanding Camp Suisse? We are growing all the time but we believe in quality over quantity. Our international summer program is our core product and tends to grow in numbers year on year. Our schools products are expanding in a number of ways. We have launched ski and snowboard trips for our school clients and the Duke of Edinburgh award which was really popular this summer.

Our focus will always be the quality of the summer program and its delivery.

What inspired you to start up the business. We were inspired by this location as we love outdoor activities – skiing, climbing, biking… We have always loved working with kids in the mountains, seeing people grow through outdoor activities and education and we believe in the benefits of helping kids to better themselves through positive interactions with others.

What do you enjoy most about working here? The kids. They are what it is all about, they bring such a great atmosphere of fun and positive energy and we are privileged to work in such a rewarding, lively, great fun environment. It is just a fantastic place to be. We also thrive on working with our team of talented, super-motivated young people – from the activity specialists to the guys in the kitchen. Oh and waking up every morning to the view of the Swiss Alps – you never get bored of that 😉 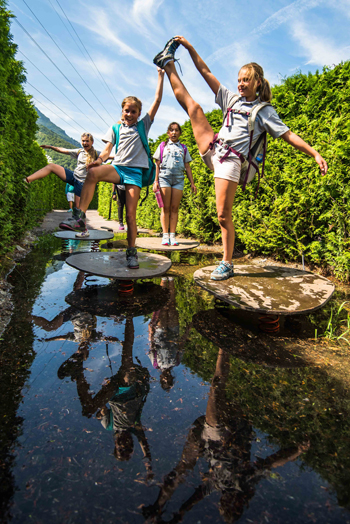 What types of children is Camp Suisse aimed at? It is aimed at all youngsters. Our campers get so much out of their time here, in their own ways. We tend to attract international, travel savvy young people from international families, many of our campers are multilingual. We were proud to welcome over 45 different nationalities to camp this summer, with ages ranging from 6-18 so as you can see there is a large range of backgrounds and cultures and that is what makes the environment so diverse and special.

How long did it take to start up the business / camp? A couple of years to launch the initial concept but we are always developing, we are constantly evolving. It is essential in this industry not to stand still. There is more competition than ever in the summer camp market with many schools and other establishments popping up ‘summer camps’ in their summer months. We believe we are the best in the industry and we work hard all the time to maintain this.

What skills do you see the children develop here at camp. We see clear and measurable development in the activities and sports we offer, in particular mountain biking, climbing, archery and navigation. We also see noted improvements in confidence in the languages we teach (French, German, Spanish, English); parents will often comment on the confidence boost with regard to learning a foreign language that an environment like ours provides. Over and above that however, for us, the essence of summer camp is about growing as people, learning those life skills that you may not learn until you leave home for university. Our youngsters thrive on their new found independence, they develop personally – learning to manage their own time, their own resources, make new friends and participate positively in a group environment. It is lovely to see the friendships develop and to know that campers have kept in touch long after camp.

NappyValleyNet was a guest of Camp Suisse. We visited their Torgon Camp in August for seven days. Prices range from £1150 for a week (excluding flights).

Your next family holiday may still seem some way off with the ongoing Covid-19 pandemic, but now’s the perfect time to plan. To help ... Read Feature

How to book your perfect family holiday

When it comes to planning a trip away for all ages, what should be fun can be quite stressful. Luckily these companies are here to ... Read Feature

A handy guide to are you shore excursions.

Do you like cramped, airless minibuses? Is your idea of an afternoon well spent, 3 hours in a gift shop? Do you have so much money ... Read Feature