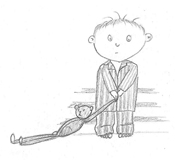 Do you ever feel guilt and regret for something that you’ve said to your child? The words that just came out of your mouth sounded as if they were from an alien being (and awfully like some things your mother said to you, and you vowed you would never say) and there is no way you would speak like that to your best friend! Immediately you regret what you said – no surprise that your child is now arguing with you. Both of you have just fallen into one of the parenting manholes – it is deep and dark and unless you have your parenting skills toolkit to hand, you are both stuck!

Don’t feel bad –we all make mistakes with the things we say. Read on to the end to see what you can do to remedy matters if you have verbally vomited on your child.

Faber and Mazlish, authors of ‘How to talk so teens will listen, and listen so teens will talk’ tell a story of a girl in her late teens who had borrowed the family car.  The father always insisted that she return the car with the petrol tank full. He was also a real stickler for punctuality, so the girl was faced with a problem when she had to get home for a family event and found herself short of time. Should she fill up and risk being late, or arrive on time, with a not-full petrol tank?  In the end, she gambled, and filled the tank and still managed to make it home on time.  She was so relieved that she raced in and said, “Dad, I’m home on time AND I’ve filled the car with petrol!”  She was met with, “Did you put oil in it as well?”

We parents get into the habit of noticing what’s wrong with our children’s behaviour and we often don’t notice what they’re doing right. It can feel very hard for kids to win parental approval. And sometimes they stop trying.

So what are the things we say that don’t show respect and don’t motivate our children?

“Hurry up Tom. You are so SLOW…..if it was down to you we would never get to school on time”

“I am so DISAPPOINTED in you  – I should have known better than that!”

“You’re so LAZY….I am sure you will ace those exams if you sit around on your backside all day gaming!”

The language we use with our kids is crucial to developing a good sense of self-worth but in the moment when our buttons get pressed we utter statements that, if said by a friend, would cause us to re-think our friendship!

1. Labelling. It is so easy to start labelling children  with LAZY, SILLY, NAUGHTY, SELFISH  – the more we label our children the more they believe what we are saying and take it on as part of their identity. It becomes a self-fulfilling prophecy. That is why ideas such as ‘the naughty step’ can be positively damaging to our children (watch out for another blog on why labels, even the positive ones, can be damaging.)

2. “I’m disappointed in you” –this is a killer statement. It’s not always obvious but our children really crave our approval and this phrase lets them know really clearly that they don’t have it. The connotations underlying this are ‘what a failure you are’.

3. “ I’m proud of you”. I know, you’re wondering what’s wrong with that? It’s definitely not the worst thing you could say to a child. We’ve all said this when our child returns from nursery or school clutching the medal or certificate – we are genuinely thrilled for their success. However it is vital we encourage our kids to value themselves, not be dependent on OUR evaluation of them. Encourage them to assess their achievements, saying:

“What did you do today that you were proud of?”

“You should free proud of yourself for doing that.”

4. ‘If’–  When trying to get kids to do something we often say “if you tidy up your toys, you can watch TV.” ‘If’ implies it is optional. Replace ‘If’ with ‘when’ and you get a completely different response. ‘When’ implies trust that they are going to tidy up and when this is done they will have earned their screen time.

5. ‘But’ – When you put ‘but’ in a sentence it negates what has preceded it and your child only hears the negative coming after it.

“Looks as if you have made an effort to tidy the toy room Laura, BUT you have put the Lego bricks in the wrong place again.” Instead you can say:

“Hey Laura– good on you for tidying up the playroom all by yourself! Do you remember the new place we have for the Lego bricks that keeps them safe and away from baby Tom?”

6. “You’re so clever.” Studies have shown that the ‘clever boy’ kind of praise is actually damaging to kids. Children praised for intelligence perform less well on tasks than children who are praised for effort and attitude. Who’d have thought…?

Words are powerful and shape experience.

What we are trying to do as parents is use our words to encourage good  behaviours and to build up a strong sense of self-worth. If we get it wrong we can apologise. “I’m so sorry I yelled at you and called you stupid. You’re not stupid. I was frustrated and worried that we would be late.” “This morning when we were rushing to leave the house I didn’t tell you how much I appreciate you helping your sister get ready. She loves it when you brush her hair.”

Be honest  – we’ve all done and said things we regret. What’s your worst outburst? In our practice they’re known as LPMs (low parenting moments) and it’s quite cathartic sharing them.

Turner prize winner Jeremy Deller, artist Lisa Milroy, and historian and writer Iain MacGregor are amongst the speakers lined up for Thinking About, a series ... Read Feature