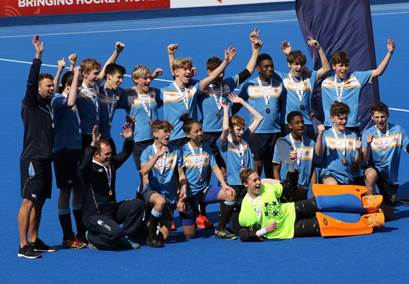 Despite another goal by RGS, Trinity dominated the second half, with Harry Bingley and Joe Cotton consistently carving their way through the midfield. Nathan Slack scored again but RGS equalised with minutes remaining leaving the score 3-3 at full-time. The title was decided by penalty strokes.

The first round of strokes ended 3-3 and sudden death followed. Fraser Myers scored for Trinity and with Tom Leigh making a decisive save, Harry Rodway sealed the win. The final score after sudden death penalty strokes was 5-4 to Trinity.

Team coach Rohan Moralee commented, “This team have improved considerably with every single game and their successful season is a result of their unwavering belief and dedicated work ethic – I am immensely proud of every one of them”.