Unseen Green: A week of eco awareness and sustainable change at Dulwich College 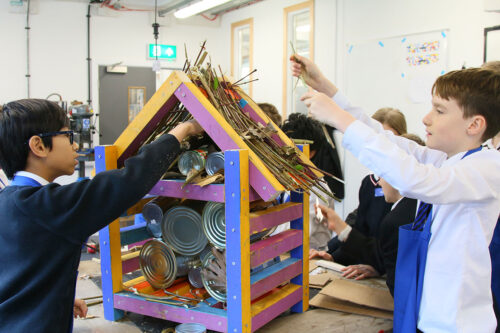 Choose Your Change
As the title infers, ‘Choose Your Change’ encouraged everyone in the College community to make a personal pledge to tackle climate change. Eco Week launched as COP 26 ended and Dulwich reached new levels of green with the launch of new sustainable projects and initiatives, such as “reuse and recycle” and to lessening our food waste by “loving our leftovers”. Dulwich College pupils had opportunity to find out more about the unseen green actions led by Mr Simon Yiend, COO, and the operations team and heard from many of our pupils who are chipping away with their own climate change campaigns; small acts that are making a big difference.

Empower this generation
Peter Milne, founder, and director of Target4Green hosted several workshops and talks throughout the week and his message was clear: we cannot rely on our politicians to fix this, there is hope and it is our young people who are taking the lead. We need to listen and empower this generation to be the change that is essential to save our planet. Peter led the Year 12 Symposium which was joined by pupils from James Allen’s Girls’ School (JAGS) and Southwark Schools’ Learning Partnership (SSLP) schools. As part of the opening talk he shared a handwritten letter he received from Sir David Attenborough thanking him for his work with schools and communities and sending a message to all young people to act.

Sustainability and food
Given the popularity of the vegan lunch, would pupils be ready for a regular meat-free Monday? This was part of the discussion in Climate Change Society’s inaugural ‘Sustainability’ forum. Simon Yiend, our COO, along with Head of Catering, Head of Procurement and Sustainability, presented on the College’s sustainable actions so far, and what’s coming next. Food was a big question from the panel and the pupils also had the opportunity to present their thoughts and ideas on how we can encourage everyone to make good choices.

Bug Hotels and Slime
Year 7 had a day of Free Learning being creatively green with their peers from JAGS hosted by the Art and D&T departments. Among many activities, they worked on making Bug Hotels from recycled materials, including wood from Yinka Illori’s ‘Colour Palace’ (rescued from the Dulwich Picture Gallery). Our Science departments led a day of Free Learning for Year 8 with JAGS pupils, with a focus on plastic production and creating sustainable slime. In Geography, Year 9 met architects alma-nac who launched their morning of designing a sustainable future. Peter Milne and T4G were back with Year 10, DUCKS and the Junior School with Free Learning days and workshops. Year 10 enjoyed presenting their pitches for sustainability and climate change apps and a particular favourite was the food waste app. DUCKS made their own sustainable pledges and Junior School learned all about the impact of climate change on children just like them all over the world.

Drowning in Plastic
All over the campus green actions were being carried out, from bike repair to measures to combat food waste focus, Year 8 pupils were ‘Drowning in Plastic’ in a Dance and Drama performance, the Lit Soc discussed the geo-humanities. The Wodehouse Library team led the pop-up library on climate change and activism, and pupils still have time to add their pledges to the green tree in the periodicals room. BioMedSoc discussed humans’ impact on the environment and where it all began and Climate Change Society ended the week with Old Alleynian (OA), Cam Henderson, describing how and why he and OAs Marcus and Alex, developed the Signature Sandwich challenge. The takeaway message being we can all make time for charitable enterprise and sustainable campaigns. 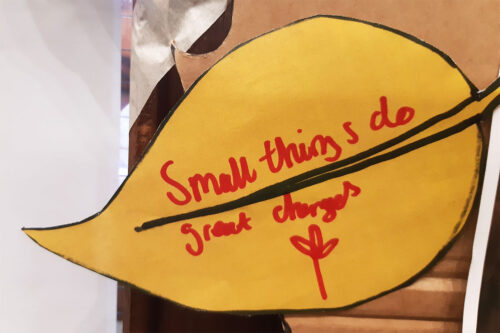 Next Steps
It is not over. Eco Week was a launch pad for the next step forward. Climate change, sustainability and choosing your change are not just topical for one week. The College’s Sustainability Action Plan can be found on the Sustainability web page together with details of 27 significant actions undertaken since 2015. There will be news about the next Sustainability forum coming soon and our hope for pupils is that they get involved and be part of our long-term aim for a greener future.

Abel in Year 12 said of the events ‘We discussed ways in which our efforts could bring about change,
we spoke on what inspired us and how we can resolve our man–made issues. A constructive day of looking into the future ended on a note of optimism’ and Jacob in Year 8 ‘It was a great experience for everyone involved’.

It seems fitting to end with a message from Sir David Attenborough:

Young people – they care. They know that this is the world that they’re going to grow up in, that they’re going to spend the rest of their lives in. But, I think it’s more idealistic than that.
They actually believe that humanity has no right to destroy and despoil regardless of the consequences.

Get your questions answered | Independent Schools Show next weekend

With over 200 schools and 100+ speakers there is no better place to get your questions answered and discover the perfect school. At the Show speak 1-1 ... Read Feature

Whether your school search is North, East, South, West or focussed on central London, the 2021 Independent Schools Show has it covered. For the upcoming Show, ... Read Feature

Eaton Square Prep School has been shortlisted as a Finalist for the ‘ISA Award for Excellence and Innovation in Equality, Diversity and Inclusion’. These nationwide, ... Read Feature