Zelman Meats used to be hot. About 6 years ago when I penned this review, https://nappyvalleynet.com/high-steaks-zelman-meats/ Zelman’s was the sort of place that people would tag each other in whilst posting pictures of steaks so massive they had their own postcode. Those of us doing something else that evening would cry at the unfairness of Facebook, Snapchat and Instagram continually reminding us of the unworthiness of our suppers compared with protein pack prandials our acquaintances were enjoying. 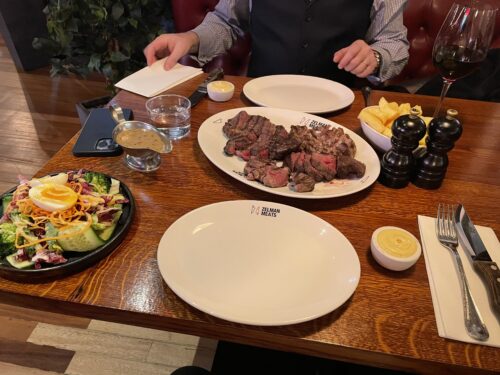 Well, that was then, and this is now. Back then Zelman’s used to be in a prime location in the middle of Soho, now it is part of the dining experiences offered on the 5th floor of Harvey Nichols. I had met my dining companion of the night, the Financier around the corner at the bar of Zuma’s, a buzzing Japanese restaurant catering to those with and those managing trust funds. Feeling as out of place as a piece of Lego at a Duplo reunion. I did notice that the joint was jumping and money circulating as if the last two years had been a figment of our collective imagination.

This was not so much the case on the 5th floor of Harvey Nicks, which was now as quiet as if in mourning for its lost customer base. Zelman Meats was one of a number of restaurant concessions available to customers and is housed in one of the sorts of units I’d say charitably you’d recognise from similar in Las Vegas hotels, or less charitably from Basildon’s Festival Leisure Park.

The interior was quite attractively laid out wait a mixture of tables and bar seating, though this Wednesday night only a few of the tables were occupied. Our booth, with its great views of the neighbouring Burger and Lobster adding to the leisure park/hotel lobby vibes, was comfortable. 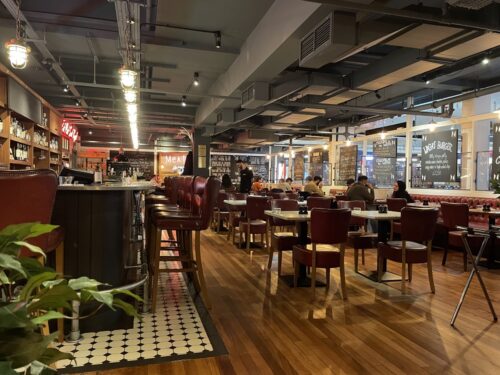 The menu is like how my friends describe me, short and to the point. There’s a mixture of starters from about £8-£11 and then a selection of steaks (fillet, sirloin, ribeye etc.) all at £35, or you can have all the steaks on a plate for £35 each if there’s at least two of you. Not much of a non-steak selection here, the now near ubiquitous wagyu burger and sea bass. Sides are a mix of salads, veggies, and chips and again a limited amount of choice.

The financier chose the burrata to start with whilst I plumped for the most expensive choice lobster croquettes. I think both of us warm somewhat disappointed, my croquettes could have had anything filling them, and the burrata was similarly bland.

I don’t think our dispositions were helped by a house red so generic I think it opened for James Blunt on his last tour. Again, nothing wrong with it, it was fine just not worth the £35 price tag attached to a house red. I think I had tempted fate but expounding the commonly held dictum that there are no bad house wines, regularly trotted out by people like me who haven’t had an original thought for weeks and plunder the greatest hits back catalogue.

The platter of many steaks arrived soon after the starters were cleared away, looking a bit like a cow reduced to jigsaw form. There was a lot of it, and I’m still not sure what was what. They were all flavoured and cooked well with ribeye and picanha both being outstanding. Here it was the side orders that let them down with the supposed triple cooked chips as pale and pasty as my former tan lines in February and superfood side salad that was in contrast overly exuberant and much to my surprised topped with an egg (this wouldn’t have been as surprising if I’d read the description on the menu. 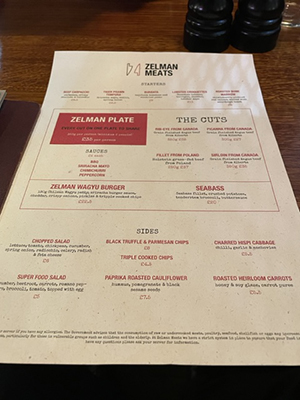 It was not the venue’s fault so much that there was little atmosphere, dining at Harvey Nicks seems presently not to be in vogue. If it were fashionable perhaps, we wouldn’t have been able to get a reservation, as it was though the sparsely populated nature of the dining room was not an encouragement to linger.

Despite disappointments, the steak platter was just as good as ever, but whereas once it had felt part of the whole experience it was now like coming across a former Hollywood ‘A’ lister doing panto in Weston-Super-Mare. The bill came to about £160 for starters, the platter, sides, and wine, at £80 this is a lot for an hour’s distraction. I do hope that the Soho original does reopen as it is somewhere I am nostalgic for, even if it was only a few years back

So with myself and the Financier by now gripped with nostalgia, we headed across Knightsbridge to the Nags Head where it is still fortunately for us 1975 in everything but price. Till the next time.

Rocking back to the Hard Rock

They say nostalgia aint what it used to be, but hey I was willing to take a chance on a stroll down memory lane (or ... Read Feature

The West End was feeling strangely under populated that Thursday evening. Whether it was the proximity of the Easter holidays, the sprightly spring weather or ... Read Feature